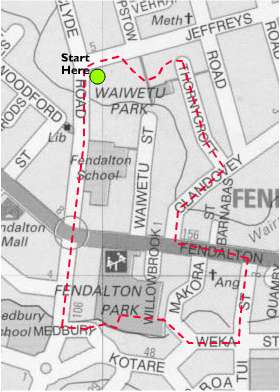 Our walk begins at Fendalton Library (4 Jeffreys Road) which opened in July 2000.

Jeffreys Road was named after an early landowner, Charles Alured Jeffreys (1821-1904), who owned 200 acres here. He emigrated to Canterbury in 1853 and was given this land by his father-in-law, Thomas Parr as part of the marriage settlement.

which was marked on early maps as the "the road from Riccarton to Papanui". It was originally known as an "accommodation road" i.e. a route for stock, but appears on a map as Clyde Road as early as 1864. It is named after the Clyde River near the Deans’ home in Scotland. Clyde Road north of the Wairarapa Stream was formerly Penhelig Road.

We cross the Wairarapa Stream. The name means "flashing water or a sudden gleam of water".

We pass the old Fendalton Library (170 Clyde Road) which opened in 1967 to serve residents of the old Waimairi District.

From here walk along Clyde Road towards Fendalton School.

This school opened in 1875 with four classrooms and was originally known as the Clyde Road School with a name change in 1883 to the Fendalton District School. At this time the school was surrounded by gorse hedges, clay roads and sheep paddocks with only a few houses.

In the 1920s the Christchurch Open-Air League persuaded the Canterbury Education Board to build some open-air classrooms. The most common type was at Fendalton School where, on sunny days, sliding doors allowed one whole wall to be opened to allow in fresh air and sunshine. Each pupil had a desk and chair which could be carried outside in fine weather.

The next three houses, after the brick house, were built around 1930 on land bought as an investment by builders, the Glue brothers. No 148 was their own home; the joinery workshop stands on what was their orchard.

The intersection of Clyde and Fendalton Roads was a thriving shopping centre until the mid-1980s when the road was widened. The shops were built originally because the tram terminus was here sited in the middle of the road. Among the shops here was a grocery shop owned by the Turners who later developed the Fendalton Mall. Traffic lights were not installed until the 1960s. (For further information see Memorial Avenue).

Cross over at the lights, walking along Clyde Road

The Anglican church for many years owned the land on the west side of Clyde Road. Sir Charles Bowen had set aside five acres of glebe land here for a church but the area was thought to be too far from settlement. St Barnabas Sunday School Hall was on the corner of Clyde Road and Memorial Avenue. It had two main halls with lots of small rooms and, incidentally, a small lending library. The church sold the hall in the 1940s and it became the community centre. By the 1960s it had become very dilapidated and was demolished in 1964 to be replaced by the present BP Service Station.

120 Clyde Road was built in 1936 and designed by William Trengrove for Harry and Gertrude Williams. Mrs Williams was a daughter of Thomas Edmonds of "Sure to Rise" baking powder fame. The property was originally of 1.5 acres and the ten children in the family were able to keep a pony in the grounds.

Walk down to the corner of Medbury Terrace and Clyde Road.

On your right is a private boys' school, Medbury, which was opened by Eric Chennells in 1923 as a preparatory school for Christ’s College. The original house, "Ripsford" built in 1900, was one of the first houses in the area (see Local History Fact File No 9). The land originally belonged to the Creyke family.

This street first appears in street directories in 1946 and is named for Medbury School. "Medbury" was Mrs Chennell’s family home in Surrey, England. Here we walk beside another tributary of the Avon, the Waimairi Stream, Waimairi meaning "listless stream or peaceful water running by a tree". The main watercourse of this can be traced out past Russley Road. A "terrace" is the name given to a street along a river bank.

An interesting historical residence is 4 Medbury Terrace. Mary Rutherford (née Gerard) built this house in the late 1890s for herself and her two children when she separated from her husband, George Rutherford Jnr. of Leslie Hills. The property was originally on two acres with an entrance from Clyde Road. It is thought to have been built by the England brothers; much of the architectural detail is similar to Riccarton House. An English elm on the property is protected. The house was originally called "Avonhoe".

Walk through the carpark and across the footbridge into Fendalton park.

Note that the Avon River is only a short distance away to your right. It is crossed by the Puriri Street bridge just across Kotare Street. The Waimairi stream and the Avon join up at Mona Vale.

Fendalton Park (originally a Domain) was a gift to the community from the Misses Kate and Annie Gerard (sisters of Mary Rutherford) whose family home "Willowbrook" stood approximately at the present location of Willowbrook Place, off Fendalton Road. The land that was gifted was part of the substantial acreage surrounding the home. In 1862 the owner of 14 acres, including this land, was J.B.A. Acland of Mt Peel.

Walk along the walkway in between the Fendalton Men’s Bowling Club and the Croquet Club.

The Men’s Bowling Club developed out of the Fendalton Company of the Home Guard which was disbanded in 1942. The Fendalton Domain Board had allocated a bowling green site on the Fendalton Road frontage but the natural drainage proved totally inadequate. The land behind "Willowbrook" was a wilderness of outhouses, stables, pig pens and fowl yards but this was an ideal area for the Women’s Bowling Club, the Croquet Club and the Men’s Bowling Club. And so in 1944 this area was bought by the Waimairi County Council.

Makora Street is at the end of the walkway. This street was not formed until the late 1940s. The first part formed, off 159 Fendalton Road, was named Kaka Street. Part of this area was once a market garden.

Turn right into Makora Street and then left into Weka Street.

Pause at 40A Weka Street and look down the driveway to a mature English oak tree. The Deans had planted a line of oaks along the stream and this is one of the remaining specimens.

James (later MP for Lyttelton) and Elizabeth McCombs (the first woman MP) moved to this land in 1904 to a house of ten rooms on five acres called "Adare". In 1907 they subdivided their property into 18 sections creating a new street. Formerly Dreumagh Avenue and re-named Tui Street in 1916. The first section was sold off in 1910. "Adare" was demolished in the early 1920s.

The Sunday School building near the corner of Tui Street and Fendalton Road was built in the 1940s to replace the building in Clyde Road.

This road (and the suburb) were named for an early settler, Walpole Cheshire Fendall (1830-1913). The area was first known as Fendall’s Town and Fendalltown, but by the 1880s the name was commonly written as Fendalton. The road was cut through Fendall’s 50-acre block of land, Rural Section 18. A house on the corner of Tui Street and Fendalton Road was bought in 1919 to be the vicarage, to replace the house in Clyde Road. This was demolished in October 2002 when work began on the Fendalton Road widening.

Stand in Fendalton Road in front of St Barnabas

This land was donated by Daniel Inwood as a site for a church in 1875. J. B. A. Acland suggested the name St Barnabas. The original wooden church was built in 1876 and used as a chapel-of-ease for St. Peters, Upper Riccarton. The Rev. J. Chaffers-Walsh was the first vicar. Plans to build in stone began as early as 1903 but were delayed by World War I so construction did not get underway until 1919. Cecil Wood was the architect. The new church was consecrated on 20 November 1926 as a memorial to those who died in the Great War 1914-1918. (NB: Local History Walk No 2 can be done at this point).

146 and 150 Fendalton Road are examples of grand Fendalton mansions. In 1990 both houses were bought by Taiwanese businessmen who formed a joint venture to subdivide five sections so forming St Barnabas Lane.

There are two possible routes to take at this point. They both lead back to Fendalton Library but the second route is shorter.

1. Walk further along Fendalton Road and turn into Glandovey Road.

12 Glandovey Road is another solid concrete house built around 1930 in Spanish style by the Glue brothers. The blue atlas cedar is protected.

27 Glandovey Road has a long tree-lined entrance which was once the driveway for the former Thornycroft estate which was established in 1893. This house, built in 1933, was on one of the first subdivisions of the estate. A large English beech tree remains and is protected.

32 Glandovey Road, unfortunately not able to be seen from the road, was built in the 1870s for Charles Jeffreys. It was his second home, the first built in 1872 was destroyed in a fire.

This street once had examples of early state houses, built in the 1930s as part of the Labour Government’s policy of building pockets of state housing throughout the city. These were still to be seen in the mid-1990s but have now been replaced by townhouses.

The original "Thornycroft" was at No 15 and built in 1893 with its entrance from Glandovey Road. Subdivision of the estate began in the 1930s when the street was formed. The original house ended its days divided into flats and in 1979 was damaged beyond repair by fire and then demolished. The house now on this site was shifted in seven sections in 1982 from its original site in Park Terrace. The six bedroom house, built by Reginald Cobb in 1871, was once owned by a former NZ Premier, Sir John Hall.

2 Continue along Fendalton Road and turn into Waiwetu Street.

This was originally called Watson’s Lane after an early settler who retired to a two acre lot here in 1890. The name "Waiwetu" translates as "starry water".

Continue through into Jeffreys Park back to the Fendalton Library.

This was formerly the Waimairi District Council works yard and was made a reserve after Waimairi amalgamated with Christchurch city in 1989.

We gratefully acknowledge the help of those local residents whose reminiscences helped us to prepare this walk.