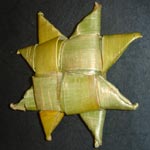 Weaving a harakeke star is one of the workshops sometimes included in our events programme for Matariki.

This instructional resource was made to support the workshops. We used some of the information from the book Fun with Flax by Mick Pendergrast.

Take one blade of harakeke

Fold in half lengthwise

Strip away the hard centre rib of the blade

Strip away the edges of the blade

Now separate the blade into two strips by pulling apart...

You should now have 4 strips ready for softening. This makes the strips easier to work with

The back (dull side) of each strip is held firmly against the blunt edge of a knife, the harakeke is pulled along the length of the knife. This is done twice on the dull side and once on the shiny side

Repeat this process on all four strips

Place on top of each other

Place the other set of strips through the loop as shown

And then bend it around the back of the loop

You now need to tighten the knot...

by pulling each of the four strips

Turn the work over

from now on the strips are used singly

Using only the top strip of each layer, work your way around the knot folding these top strips so that they over lap each other

The lower set of strips remains in its original position

Fold the same strip down towards you to form a point

Fold the pointed triangle in half

Trim close to the knot

You have completed your first point of the star

Congratulations you have made an 8 point star