In 2001 Christchurch City Libraries and the Christchurch Drama Centre presented a Bookgig based on two of Margaret Mahy’s books, A busy day for a good grandmother and The five sisters. Scripted by the Drama Centre’s director Rosie Belton, the Bookgig was performed by students of the Centre for pupils from local primary schools. 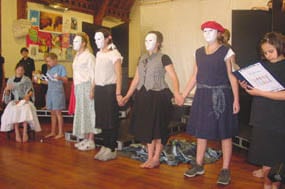 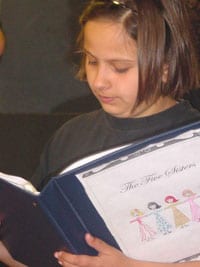 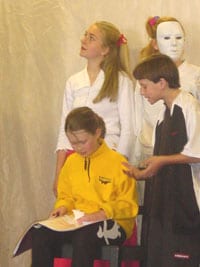 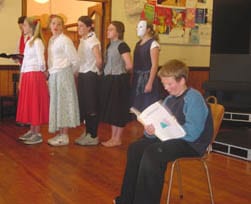 The riddle of the frozen phantom book launch 2001

Margaret Mahy’s book, The riddle of the frozen phantom, was launched 14 November 2001 at Christchurch City Libraries. This mystery adventure was inspired by a visit the author made to Antarctica a few years before.

When Sophie Sapwood discovers a whalebone pendant hidden in a chest of drawers, the ghost of Captain Cathcardo wakes from an ancient sleep to find himself trapped in the frozen wastes on his ship, The Riddle. His cries for help travel through the stratosphere and reach three different persons, who immediately organise trips to the Antarctic.

During the launch, for which she wore a penguin costume, Margaret read from the book and also described some of her memorable experiences on the ice, including helping build (and sleep in) an ice cave, watching penguins and having to dress in five layers of clothes. 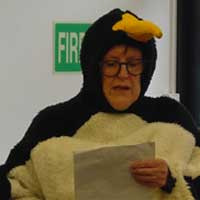 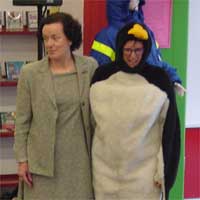 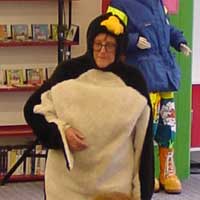 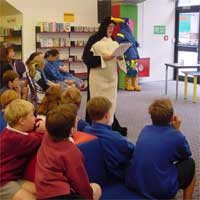 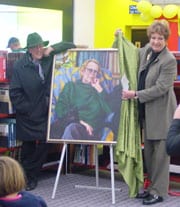 The portrait is part of a series, The Face of the Writer — portraits of New Zealand Writers, by artist Glenda Randerson. The series was a six year project, and toured public galleries for the previous two years.

Margaret Mahy was the Children’s Librarian at the library from 1976 to 1980, when she resigned to become a full-time writer.

The painting was on display in the Centre for the Child until it was removed after the Christchurch earthquakes.

It is currently on display at Tūranga by the Margaret Mahy Collection.

Following the looping line was a one-day symposium exploring the literary legacy of Margaret Mahy. It was a lively programme of panel discussions, conversations and reader responses aiming to deepen understanding and extend discussion of the work of a national treasure. It featured some of New Zealand’s leading writers for children and notable commentators on children’s literature. Fiind out more about Following the looping line.

28 September to 8 December 2019 - Tūranga
A number of events were held to celebrate this impressive milestone including A Lion in the Meadow Activity Zone, a place to read, relax and explore, with activities inspired by the book, A Roaring Read, where readers were asked to discuss and share their favourite Margaret Mahy books and a special Lion in the Meadow Storytimes.