Find out more about Margaret Mahy's life and work.

Books by Margaret Mahy at the library 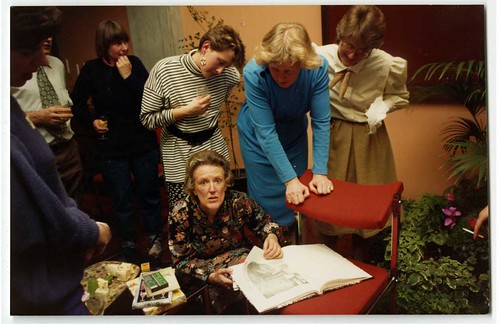 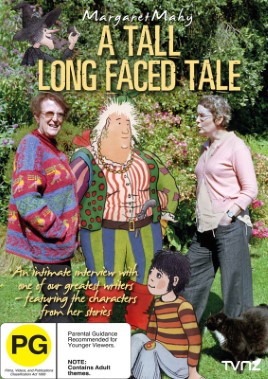 An interviewer once asked Margaret Mahy: If you were transformed into your true self, what would you become? Mahy replied, A tall, long-faced tale. What better way to describe a person who is widely acknowledged to be one of New Zealand's greatest writers? Margaret Mahy is famous for her children’s and young adult books and has received many literary accolades, the most recent being the Hans Christian Andersen Award in 2006 - one of the world’s most prestigious acknowledgements for excellence in children’s writing. But there is much more to Margaret Mahy than that.

In the documentary A Tall, Long-Faced Tale, viewers get an opportunity to see the real Mahy - Mahy the intellectual, Mahy the magical, Mahy the witty, the whimsical and the wicked, as interviewed by some of her own fictional characters and fellow author Elizabeth Knox. When director Yvonne Mackay suggested that in this documentary Mahy’s own characters might also help interview her, Mahy was so intrigued about what could eventuate, she forgot her vow never to do another documentary that might even slightly resemble a biography. Animated paper cut-outs like the Lion from The Lion In The Meadow and the Witch from The Witch In The Cherry Tree step into Mahy’s living room and her life. They leave as they came, appearing and vanishing as slickly as a Cheshire cat. Adding to these fascinating characters are interviews with some of Mahy’s extraordinary illustrators - Quentin Blake, Steven Kellogg and Jenny Williams.

This Inspiration edition profiles beloved Kiwi children's author Margaret Mahy: from her childhood as "Mad Margaret", through her days as an unmarried mother and librarian to an internationally acclaimed writing career. The centrepiece is a specially commissioned — and typically zany — story about a story (complete with talking mail boxes, typewriters and bookshelves) where Mahy goes meta, and explores the role imagination plays in her work. Keith Hunter's documentary provides vivid evidence of the remarkable bond Mahy shared with her readers.

The film takes a line from her award-winning story The Changeover — "...made in New Zealand, it said, Wisdom Laboratories, Paraparaumu" — and uses it to talk about the importance of New Zealand settings in Mahy's work, her international successes, and her life as a writer. Mahy is filmed at her home in Governors Bay, speaking to children in her famous rainbow wig, and out and about on Akaroa Peninsula.

An archive of Margaret Mahy's papers is held in the Christchurch City Libraries Archives Collection, including:

Interview with Margaret Mahy Margaret Mahy and Elissa Gershowitz
The interview focuses on her writing process and the difficulty of writing for the US market while living in New Zealand. Horn Book Magazine, 85.6, Nov-Dec 2009

Yvonne Mackay and Margaret Mahy: A special partnership... NZ On Screen 2008
Margaret Mahy and television and film producer and director Yvonne Mackay collaborated on a number of screen projects based on Mahy's books and scripts.

Margaret Mahy’s speech The Catalogue of the Universe from the Are Angels ok? conference RNZ 2006
The universe is not symmetrical and nor is common sense necessarily sensical - in Catalogue of the Universe, New Zealand's most loved children's author Margaret Mahy catalogues her own fascination with science and knowledge and investigates the illogic of fact, the boundaries of fact and fiction and of research and imagination.

Margaret Mahy died on Monday 23 July 2012. Here is a selection of tributes, obituaries, and articles commemorating Margaret and her mahi:

... My earliest memory of reading a Margaret Mahy book was The Boy With Two Shadows, about a boy who is plagued by the shadow of a witch and has to become increasingly canny to try and get rid of it. Oh, how I felt the frustration of that boy! I was just a few years too old for her young adult books when she started writing them, but I read and very much enjoyed The Tricksters a few years ago.

There is something so unusual in the way she constructs her stories. She tells a rollicking tale, but there is always something bumpy, something skew-whiff going on, whether it’s a character who is cliché-free or a plot that takes off in impossible, unexpected directions – a direction that you almost don’t want and are reluctant to follow because it confounds your expectations so much, but if everything happened the way we expected it to, reading would get a bit boring ...

... Thank you, Margaret Mahy, for giving me a heroine who looked like me. Thank you for making her nothing like that insipid, whiny Bella Swan. Thank you for showing me that my city and my stories might be as entertaining and worthy of a book as the streets of Paris or the victories of foreign kings. Thank you for being completely and utterly comfortable with difference. Thank you for the rainbow afro wig.

The only sadness I feel at your passing, since you had such a long and extraordinary life, is the idea that you might not have known what you gave us, what it meant to us, the kids you inspired. It's the regret of someone who really should have taken the opportunity to say thank you in person. But I kind of think that someone of your imagination probably knew, right? ...

Read more: What I learned from Margaret Mahy by librarian Moata Tamaira on her Stuff blog Blog Idle.

On Monday evening, I was on Twitter enjoying some Te Reo discussions. Tweets began to filter through that Margaret Mahy had died. They were tentative and probing tweets as people tried to discover if it was true. Her Wikipedia article had date of death added, Whitcoulls had a Facebook post, but many of us were eager to believe it was a hoax or misinformation.

But when Bookman Beattie posted R.I.P. Margaret Mahy 21 March 1936 – 23 July 2012 the librarians and journalists amongst us realised it was true. Gutted. We were gutted. I didn’t go to bed until much later – after a lot of emotional online sharing.

Monday had been a big day. Our new Central Library Tuam opened. Our wonderful and popular South Library closed after its seismic capacity was evaluated at less than 34 percent of the New Building Standard (NBS).

Margaret had of course been our Children’s Librarian – a Kiwi character, ardent library supporter and a peerless imaginative writer. A huge huge loss.

On Tuesday I donned a fuzzy wig in tribute to Margaret. It was her thing to wear the fro, or a costume – and I wanted to do a wee tribute. My daughter tried to wrestle it off me in the morning. No-one on the bus batted an eye. Librarians (many who had worked with Margaret) enjoyed my getup and shared their Mahy memories. We went wiggy online too – decorating our avatars on Twitter and Facebook.

On the bus home, a gent said “I love the look”. I said “Do you know what it’s about?”. He said “Oh yes, I saw you the other day dressed as a gargoyle”. Seemed to me a Mahy moment.

We loved you Margaret. And we’re so lucky to have your words still. Arohanui.