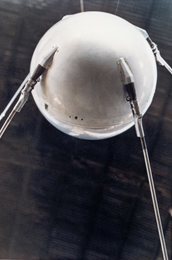 On October 4, 1957, the Soviet Union launched the first artificial Earth satellite, Sputnik I. From its launch site on Baikonur (Tyuratam) just east of the Aral Sea, Sputnik (meaning fellow traveller and satellite) was carried via a three-stage rocket at a final orbital boost of 1700mph (2735.88 kph) into orbit, at an altitude of 900 kilometres.

Sputnik I was a spherical shape, 58 centimetres in diameter, with four radio aerials trailing from the globe. It weighed 83.6 kilograms. Photographs of the launch were not released until well after the event.

William Shelton's book, Soviet space exploration the first decade, details the workings of the satellite. Inside Sputnik I was a radio transmitter that sent information back to earth on two frequencies. Instruments to gather and send information of density, temperature, cosmic rays and micrometeroid activity were also included. NASA’s website carries a sound recording of the transmissions.

It was only the beeping reality of Sputnik that suddenly made the threat of intercontinental atomic warfare with ballistic rockets more than a science fiction story.
New Zealand scientist Sir William Pickering, quoted in a 1993 lecture on the NZ Edge website.

Pickering was a central figure in the American space effort as head of the Jet Propulsion Laboratory, and later oversaw Nasa missions to Venus and into deep space.

No fewer than 83 reports were carried by The Christchurch Star-Sun and The Press in the first ten days after the launch of Sputnik I featuring local reaction to the story, graphics mapping the satellite's trajectory over New Zealand, and sightings from around the country of the satellite and its rocket.

Sputnik II was launched less than one month later — this time carrying a dog, Laika, into space. The payload was massively heavier, and Soviet success spurred the United States to increase the pace of their space-related work, firstly announcing the Explorer project, and then in 1958, creating NASA, the National Aeronautics and Space Administration. Sputnik II was visible over New York City.

The size and the audacity of the Soviet project caught world attention and dwarfed United States plans to launch a satellite known as Vanguard. Sputnik I was eight times heavier than Vanguard was planned to be. The Vanguard satellite survived an explosion on launch in December 1957.

Announcing the Sputnik I launch, the Pravda newspaper wrote:

"The successful launching of the first man-made earth satellite makes a most important contribution to the treasure-house of world science and culture. The scientific experiment accomplished at such a great height is of tremendous importance for learning the properties of cosmic space and for studying the earth as a planet of our solar system."

The article also said that artificial Earth satellites would pave the way for interplanetary travel in the future.

A special 'orbital coin' was minted in Australia to commemorate the 50th anniversary of the launch.

Browse the resources in our libraries