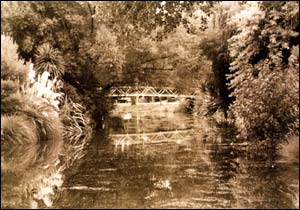 Ōpāwaho is the Māori name for the Heathcote River.

The area known today as Opawa derives its name from the pā once located where the present-day Judge Street and Vincent Place once intersected.

It was known as Ōpāwaho, which refers to its function as a waho (outpost). It was a resting place for Ngāi Tahu travelling between Kaiapoi and Horomaka (Banks Peninsula).

The land in this area was once marshy and covered in grasses, raupō and tussock.

Poho Areare, meaning pigeon-breasted was the name of an original chief of Ōpāwaho and his name is given to the old Māori track that led over the sandhills from Opawa to South New Brighton. Tūrakipō was its later chief.

The swamps draining the Ōpāwaho were called Te Kuru and the upper reaches of the river at Spreydon bore the name Wai Mokihi after a smaller pā located there called Ō Mokihi meaning place of the flax staff rafts.

This area was an important mahinga kai, a source of plentiful food, especially tuere (blind eel) and kanakana (lamprey).