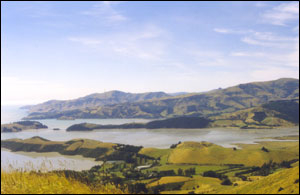 Te Ahu Pātiki is the prominent peak above Purau, Te Waipapa (Diamond Harbour) and Te Wharau (Charteris Bay) that was once the site of a fortified Ngāti Māmoe pā.

It is the highest point of Whakaraupō and is possibly the oldest pā site on Horomaka (Bank’s Peninsula).

Purau bay has a long history of occupation by Waitaha, Ngāti Māmoe and Ngāi Tahu.

During the raids of Te Rauparaha many Māori took refuge in the thick bush growing in the valleys of Te Ahu Pātiki.

The name Te Ahu Pātiki meaning shaped like a flounder is known among Chatham Islanders who preserve a tradition that their ancestors came from the foot of this mountain.