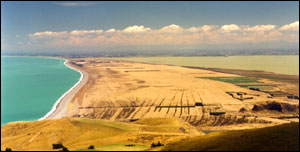 This long sandy spit that separates Te Waihora (Lake Ellesmere) from the sea was once an important thoroughfare for Māori travelling from Horomaka (Banks Peninsula) to settlements such as Kaiapoi and Kaikōura.

Kaitōrete provided ease of travel when compared to the swampy route inland around the edges of Te Waihora.

The remains of many ovens and middens along Kaitōrete’s length are an indication of the great numbers of people who travelled this ancient highway which extends for nearly 30 kilometres down Te Wai Pounamu’s eastern coast.

Kaitōrete is flanked by Taumutu at its southern end and the site of Waikākahi pā in the north.

The area is steeped in the histories of Ngāi Tahu, Ngāti Māmoe and Waitaha.