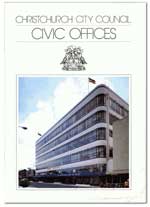 The former Civic Offices, opened by Her Royal Highness The Duchess of Kent on 12 November 1980, provided an interesting example of the conversion of a building for a different use.

Original design and use

The building was originally designed in 1935 by G. A. Hart for the retail store, factory and warehouse Millers and was completed in 1939. It was notable for its structural design concept of beamless floor slab construction in reinforced concrete where the design loads, including earthquake forces, are transferred to the hexagonal columns by mushroom-shaped heads and drop slabs.

This concept was originated by a French Swiss engineer, Robert Maillart around 1912 and was further developed in the 1920s by the Bauhaus in Germany under the architects, Peter Behrens and Walter Gropius.

Millers was a well established retail and manufacturing business with many branch shops. The building was their head office, factory and main retail store. It boasted the first escalator in the South Island and one of the first in New Zealand. When the building was put up for sale in 1978 the council purchased it to refurbish as Civic Offices.

When planning for this, its fourth home, the Christchurch City Council initially had plans to erect new offices adjacent to the Christchurch Town Hall but inflation rendered this impractical. Conversion of the building had a number of advantages. Re-housing the staff from nine separate locations to provide a better service to the public, enhancing efficiency and improving staff working conditions was obvious enough, but additionally, some millions of dollars would be injected promptly into the local construction industry at a time when it was most needed. Also, just as the Town Hall had provided an impetus for development north of the Cathedral Square, the new Civic Offices were expected to do the same for the south. As far as public buildings were concerned, the south-eastern quadrant of the central business district had been rather neglected in the past. Finally, in an era concerned with conservation there seemed to be considerable virtue in recycling a sound existing building rather than building a new one.

With 12,235 m2 of office floor space, the Civic Offices were estimated to have a residual life of 60 years and the low rise nature of the building - only five levels - was considered ideal for the Council’s purposes, enabling whole departments, in the main, to remain on one level.

The building was fully air conditioned and all floors are linked by escalators. The open plan office principle was adopted with liberal use of fabric wall linings and plant foliage to provide good acoustic qualities and a pleasant work environment.

The cost of the project at $5.9 million was less than half the cost of new construction. It was completed after 2 1/2 years, in September 1980. The design team was led by the former Christchurch City Architect, G S R Fenton, and M D Woods Limited was the project manager, coordinating over 150 separate contracts.

In 1989 the Christchurch City Council amalgamated with the Christchurch Drainage Board and other local authorities and as a consequence the Technical Services Group grew to include the newly formed Waste Management and Water Services Units. To complete the philosophy of housing all staff under one roof which began in 1977, it was necessary to relocate the staff from Cambridge House to the Civic Offices. To achieve this, the Council in 1993 purchased the three storey former supermarket building adjacent to the Civic Offices. This was converted into modern office accommodation complete with access links between the two buildings. In April 1995, staff from Cambridge House moved into the third floor, Civic Offices. The purchase and fitout cost of the adjacent annex building, including the upgrading of the air conditioning system, and refurbishment of the main Civic Offices building, which was completed in 1996, was approximately $6.4 million.

Move to a new Civic Offices

In its 2004 Community Plan, the Council indicated it would spend $53.7m of capital over the next six financial years to provide new Civic Offices. The decision was in response to increasing problems with the existing building, including lack of space, poor ventilation, an aging boiler, leaking windows, poorly located lifts, earthquake strengthening requirements and high maintenance and running costs.The Christchurch City Council moved into new premises in the refurbished former New Zealand Post building on Hereford Street in August, 2010. 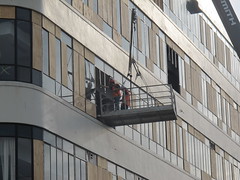 The building was standing empty when the earthquakes of 2010 and 2011 hit the city. The building was damaged and in May 2014 it was demolished to make way for a new bus exchange.