William Thomas Trethewey was a monumental mason and sculptor who created many memorials around Christchurch and the wider Canterbury region. His most well known works are the Cenotaph in Cathedral Square and the Captain Cook statue in Victoria Square.

A self taught sculptor

William Thomas Trethewey was born in 1892, the son of Cornish migrants. A monumental mason and self-taught sculptor, he obtained new opportunities following the First World War when local communities wanted war memorials. He first created a simple stone cross for Elmwood School, then Kaiapoi’s war memorial - a war-weary soldier who was yet ready to leap … into the fray 1.

Waimate doctor Margaret Cruickshank died of influenza in 1918, following heroic duty to her patients. Local residents asked Trethewey to design a statue of their late doctor. Guided by photographs, he produced a plaster bust and sought feedback by placing it in a local shop window.

He created a 3.3 metre Carrara marble statue in his Victoria Street workshop. It depicted a forthright … regal-looking woman clothed in … academic gown, with … Bible in her left hand … 2.

In North Canterbury, following the 1918 influenza epidemic, residents realised the need for a local hospital and campaigned successfully to have it built at Waikari. Their actions were, in part, an attempt to honour Dr Charles Little who had given heroic service to the community during the epidemic.

Henry Saundercock, storekeeper, felt this was not enough. He chaired a committee which commissioned Trethewey to produce a statue of the doctor. To reduce costs, the sculptor had the body carved in Italy with the head blocked out in rough form for Trethewey to complete in his studio. The statue was unveiled in 1929 3.

Trethewey’s statues received considerable praise. Margaret Cruickshank’s relatives thought the likeness … a true one and townsfolk spoke of having a memorial worthy of a master sculptor 4. North Canterbury residents thought the Charles Little statue wonderfully like their old friend 5.

The Waimate statue was unveiled by Mrs. Barclay, wife of Margaret Cruickshank’s medical partner, in the town’s central park, on 25 July 1923. It bears the inscription Margaret B. Cruickshank M.D. The beloved physician, faithful unto death.

The Charles Little statue stands on the hillside in front of the Waikari Hospital, and looks over the valley and surrounding hills. The plinth reads: Erected by his friends to commemorate a life of devotion and self sacrifice. 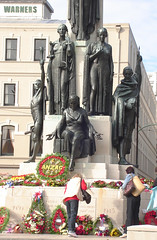 William Trethewey went on to design the 1937 Citizens’ War Memorial beside ChristChurch Cathedral. The figures, based on the sculptor’s family, staff and friends, had intensely individual faces and represent Youth, Justice, Peace, Valour and Sacrifice; above, an angel breaks the sword of war.

For the New Zealand Centennial Exhibition in Wellington in 1940 he created an array of sculptures in plaster. Of these only the large Kupe statue remains. This depicts the great Māori explorer Kupe, his wife Hine Te Aparangi and Peka-Hourangi in their canoe Matahoua. For many years it stood in the entrance foyer of Wellington Railway Station. More recently it has been cast in bronze and now stands on the Wellington waterfront at the Taranaki Street Wharf.

Trethewey’s work amid stone dust – and his chain smoking – brought on emphysema. He died in 1956, aged 63. The Trethewey family stone stands in Bromley Cemetery, amongst many others which William had designed 6.