This year, 2022, the relationship between New Zealand and Japan hits a historic milestone. It has been 70 years since these two countries’ diplomatic relationship was established and ever since the agreement was signed in 1952, the two countries’ bond has grown stronger in terms of trade, tourism, economy and cultural awareness.

One of the ways to strengthen the connection between NZ and Japan is to take part in the Sister City Programme, and Christchurch is fortunate to have Kurashiki, a lovely city along the Takahashi River on the coast of Seto Inland in Okayama Prefecture, as its sister city.  They continue to have an active relationship since 7 March 1973 and the Christchurch-Kurashiki Sister City Committee still provides support especially when it comes to student exchange programmes.

This year also marks the 10th year since the start of Canterbury Japan Day. The first event was held on 11 March 2012 on Riccarton Racecourse to celebrate the 60th anniversary of NZ and Japan's diplomatic relationship. The annual events have been a great success, they have been highly anticipated and well attended over the years but sadly have been cancelled this year due to the pandemic. 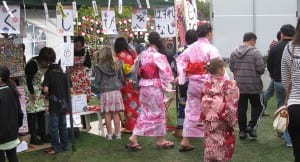 now, Christchurch City Libraries has continued to celebrate Japan Day with various Japanese groups and with the support of the Consular Office of Japan. In previous years, we have had the Ikebana workshop, Haiku workshop, performances of Takumi Drumming Group, a Tea ceremony, a Koto performance by the Shiki group and Tim Lomax’s “Life After Three Eleven” photo exhibition. The Consular Office of Japan also generously lent us Japanese artefacts for display.

As this year is a milestone for NZ and Japan, we will continue the tradition of celebrating Japan Day in the library with performances and activities not just in one, but in two libraries: Tūranga and Te Hāpua Libraries.

Te Hāpua: Halswell Centre will kick off the celebration on 12 March with Japanese displays, colouring in, crafts and origami activities for families and which will run all day until 20 March.

The Japanese Shiki Group will once again enthral their audience with their performance using the traditional Japanese musical instrument, Koto.  For this year, they will have performances in both libraries: Te Hāpua: 2–2.45pm Saturday, 19 March and Tūranga: 1–3pm Sunday 20 March.

Another crowd-pleaser that will definitely come back to the library is the favourite Takumi Drumming Group. If you missed seeing them perform during the Canterbury Japan Day or their annual concert, drop by at Te Hāpua on Sunday 20 March, 3–3.15.

For the for the first time in the library, Sei Tou Ken Yu Kai Canterbury Kendo Club joins the celebration and will showcase a 50-minute kendo demonstration at Tūranga on 20 March during the Celebrate Japanese Culture event.

And all throughout this celebration, beautiful Japanese artefacts will also be displayed in both libraries' foyer and the Japanese Society of Canterbury will provide a kimono to be displayed during the event at Tūranga. Kimono paper dolls are available to download from this Christchurch City Libraries blog.

The usual Canterbury Japan Day celebrations may be missed this year but Christchurch City Libraries will carry on the tradition.