We are currently investigating an issue that is causing intermittent "504 Gateway Time-out" errors in the catalogue.

New Zealand Music Month has just ended, and even though we haven't been able to enjoy many concerts or public performances this year, it's been great for 'couch concerts' in the comfort of your living room.

The koto (箏), or Japanese zither, was introduced to Japan from China during in the 7th and 8th centuries, and belongs to the family of Asian zithers. Like other elements of Japanese culture that originally came from China, the koto and its music was adapted to Japanese taste and became a distinctive part of Japanese culture. It is even the national instrument of Japan, and remains the most popular traditional Japanese instrument to learn.

The koto typically has 13 strings (although there are variants), and was originally played by the wealthy at court from the Heian Period 平安時代 (794-1185) onwards. Women were initially prohibited from professionally performing and teaching koto, but still learned to play the romantic instrument privately. There's even a part in Murasaki Shikibu's court epic The Tale of Genji where Genji falls in love with a woman he's never seen, just by listening to her play the koto.

Check out this fascinating 15 minute video on Access Video, if you're interested in hearing, seeing, and learning more about Japanese music and instruments; it goes into the history of Japanese music, and instruments like the koto, shakuhachi (尺八) flute, biwa (琵琶) and shamisen (三味線) guitars, and taiko (太鼓) drums. 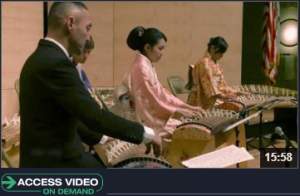 I've been fortunate to have the opportunity to ask Maureen Heffernan, one of Shiki Japanese Music Group's members, some questions about the group and playing the koto.

Could you tell me a bit about the Shiki Japanese Music Group – when the group was formed, how long you've all been playing koto?

Shiki Japanese Music Group is named after the Four Seasons (Shiki四季) and was formed in 2016 with 5 foundation members: Chiharu Kuze, Yasuko Eady, Kazuko Iwai, Akiko Hill & Maureen Heffernan. The newest member is Caitlin Broomfield who joined in 2019. The aim of the group is to perform Japanese music on traditional Japanese instruments: the koto, a zither originating in China and introduced into Japan in the 7th & 8th century.  It is made of pawlonia and has 13 strings with moveable bridges. There is also a 17-stringed version. Some members also play the sangen, a 3-stringed plucked lute.

Actually, Shiki's foundation members all previously belonged to Koyu-kai Japanese Music Group交友会 meaning “a group of friends performing together”. Under founder & musical director, Ms Masumi Hashimoto, Koyu-kai first performed in the Great Hall of the Arts Centre for the 1996 Festival of Japan and had 20 most successful years of sharing Japanese music with Kiwis, performing with visiting Japanese musicians and at schools, as well as having an annual recital. Several other Japanese and Kiwi members also played in Koyu-kai.

Shiki is continuing the tradition of performing at Canterbury Japan Day and giving concerts. As well as our core members, we often have extra musicians come and join in. We would like more people to enjoy learning about Japanese music through seeing us playing these traditional instruments.

What inspired you to learn to play the koto?

Being very interested in Japan and studying Japanese, I had studied the piano so wanted to learn a Japanese musical instrument. After university I was able to go to Japan to study the koto. Fortunately when I returned to Christchurch Ms Hashimoto was here so I was able to continue learning under her guidance.  Two of the other members had studied previously in Japan and others had always been very fascinated by the koto. When they came to a Koyu-kai or Shiki concert, their interest was piqued so they began learning. While on a school exchange to Japan, Caitlin joined a koto club and wanted to learn when she came home.

What are some of your favourite elements of Japanese music?

My favourite elements of Japanese music are the delicate melodies, bending or pinching the strings to obtain a semitone and the repetitive patterns that become very familiar. Also the way that the sounds of nature are incorporated into playing is unique, for example swishing the pick across the strings to suggest a breeze, or a melody which imitates a bird's song.

What are some of the more challenging aspects of playing Japanese music or the koto?

Tuning the koto can be challenging because it has moveable bridges, one for under each string. Of course, it's really important to make sure the tuning is exactly correct. With the sangen, each string is tightened with a peg but they tend to slacken and go out of tune easily, so again it's important to keep checking and retuning. Another challenge is learning a classical song to sing as you play because it is unlike learning a Western classical song where the music accompanies the melody. It is more like playing a melody on the koto and singing a different melody at the same time.

Do you have any advice for anyone who also loves Japanese music, and are interested in learning to play?

Yes, please take the opportunity to listen to Japanese music on YouTube or by going to a concert. Come along to our recital and talk with us.

A special thanks to Maureen, for helping us put together this blog with an interview and photos, and the rest of the Shiki Japanese Music Group.We hope to be able to come and see and hear you play soon!

Want to listen to some Japanese music, from the comfort of your own device? Check out these Naxos Music Library World albums!

Browse our collection of koto music.