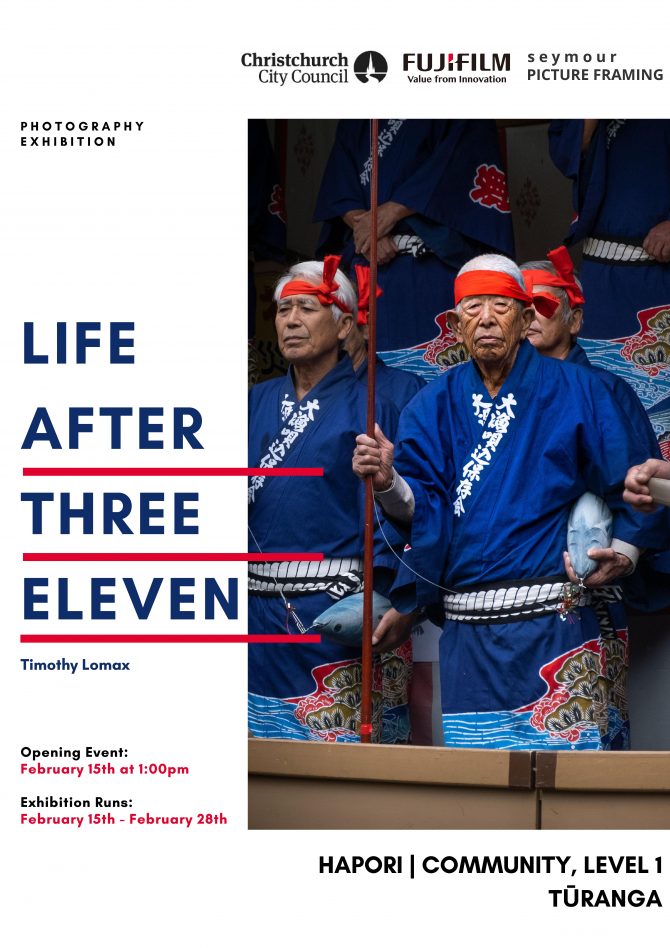 'Life After Three Eleven' is a photography exhibition by local photographer Timothy Lomax (New Zealand Institute of Professional Photography Iris Awards 2020, 1 Silver and 6 Bronze Awards in the Travel/Documentary Categories), featuring his collection of photographs that shares the experiences and stories of Kesennuma, a small fishing town in Northern Japan.

Kesennuma was one of the worst hit towns on the Sanriku coastline during the 2011 tsunami, and the exhibition aims to capture the full scope of Kesennuma, but also showcase the inspiring resilience and perseverance of the people Timothy was able to meet while abroad.

We have an interview with Tim telling us a bit about himself, Kesennuma, and his photography, in advance of the exhibition's opening on Monday 15 February.

Tell us a bit about yourself.

Well, my name's Timothy Lomax and I am a current student at Ara Institute of Canterbury, studying towards my Master of Creative Practice qualification. I have spent the last four years honing my skills through many different experiences, such as photographing the runways at New Zealand Fashion Week, working with local fashion brands to create online content, as well as working one on one with clients on a range of small projects. Additionally, each year I have entered into the NZIPP’s (New Zealand Institute of Professional Photography) annual Iris Awards where I’ve been awarded for a range of my images through the documentary, travel and student categories; some of which led me to winning New Zealand Student Photographer of the Year Award in 2019.

Tell us about the exhibition 'Life After Three Eleven'.

As the main prerequisite for my bachelor’s degree, we were required to complete a research project for the final year. This was something that took quite a bit of self-reflection to get to because I wanted my project to be more than a tick in the box; I was wanting it to be something of importance as well as challenging. Eventually, I thought back to my first year of study where I did a small research project on the documentary photography that captured the aftermath of March 11th [Great Tōhoku Earthquake and tsunami]. Coastline in Northern Japan, I was surprised to see a lot of imagery online that seemed frozen in time. At this point, it was just over eight years since the disaster had happened, and similarly to Christchurch, I thought progress must have been made in terms of the region’s regeneration. So, after some research on the history of the region I decided to travel to Kesennuma to document the progress that had been made with their rebuild, as well as meet with the local community to hear their stories and experiences first-hand.

Why Japan? What drew you to Kesennuma?

I have always had an affinity with Japan since I was young, everything from its language and cultural identity intrigued me. After studying Japanese full-time for a year, I was lucky enough to travel there for the first time in 2015, which was a childhood dream come true. It was then that my interests solidified, and I knew I had much more to learn from the country.

Throughout my research of the region’s history, I found out that tsunami were a regular occurrence for the Sanriku Coastline, two of which in 1896 and 1933 were of similar scale to the 2011 disaster. The cause of such destructive waves occurs because of the region’s rias coastline, which tends to give tsunami higher, more powerful waves due to the shallow waters. After watching many documentaries and videos about the disaster, it was clear that Kesennuma was one of the worst struck areas. I also discovered that Kesennuma is one of Japan’s main fishing ports and has a long history with deep sea fishing, which creates an interesting relationship between the townspeople and the ocean.

Where do you draw your inspiration?

For photography in general I tend to gain inspiration from other photographers, and I think that’s part of the craft's charm – we all see the world differently and can constantly improve on our skills through different perspectives and experiences. For ‘Life After Three Eleven’ I did briefly look into other documentary photographers to see how they used narrative to share a story through a body of work. I also looked into Japanese photographers Daidō Moriyama and Yoshinori Mizutani’s work, which were really inspiring. Being my first documentary, I really wanted to learn to trust my own intuition, as I was having a bit of an ‘identity crisis’ with my own personal style at the time and was interested to see how the work would organically unfold as it progressed.

What are some of the best or most memorable experiences of your trip?

The most memorable and best part of the trip for me was being able to meet so many wonderful people along the way. I felt very privileged to be so warmly welcomed into the community and to have people open up and share their experiences with me. It really was one of the most challenging yet humbling experiences I have ever had in my life, and is honestly something I think about every day. It also taught me a lot about the importance of community and how our connection to each other as a collective is powerful. The resilience, pride, and dedication that was displayed in Kesennuma left me in awe, and I can only hope that my photographs successfully captured the sense of connection I felt while there.

You were telling me earlier about a charity that is helping Kesennuma recover since the natural disaster in 2011. Can you tell us a bit more about that?

While I was abroad, I was lucky enough to meet with the NPO Hamawarasu, which is a charity organisation based in Kesennuma who work with local children around Miyagi prefecture. The organisation's name Hamawarasu roughly translates to ‘beach kids’, and they mainly focus on hands-on activities to encourage water safety in and around the ocean while also educating the children about nature. While I was in town, I was able to help with a beach clean up with one of the local schools, where we spent the morning picking up rubbish that still washes ashore. Other activities Hamawarasu organise include swimming and surfing lessons, fishing with local fishermen, camping, cooking, farming activities and much more. As a way to give back to the community, and as a way to thank them for their hospitality, I have started a fundraiser in the hopes of raising some donations to go towards future activities. I have created a signed limited-edition charity print as well as a limited run photobook where a donation is made from the proceeds. Alternatively, you can learn more about Hamawarasu on their website or view the video which will be running at the exhibition to gain more insight into the wonderful work they do.

Any advice for aspiring photographers?

Be patient and be present!

Photography is a skill that constantly changes and develops overtime, as an industry and as a practitioner yourself.

I would say explore any genre that pulls your attention and then look into photographers who inspire you; from there try to find your own spin to your work. Experiment with different techniques while shooting – different angles, lighting conditions, composition, shutter speeds, and maybe set yourself mini projects and aim to create small portfolios. Play around in post-production – you can always undo any editing or restart. Also, as one of my mentors says, “Print your images!” do not keep them as just digital files, create artworks for your family or friends.

Look into online seminars, videos, books, art styles, it can all be applied to your creative process. Also, mistakes are where you learn the most so be brave! I have also found the annual NZIPP Iris Awards’ judging to be very informative and definitely has nuggets of wisdom to be found throughout the critique process.

What is next for you?

I have a busy few months ahead as the end of my master’s qualification approaches. I will be having my graduate exhibition 'DISPOSITION' at the end of March and then will be aiming to head back to Japan to see what next adventure awaits.

A big thanks to Timothy for coming in to have a chat to us about the exhibition– it's one to look forward to, with the opening on Monday 15 February, 1pm.

Learn how to compose Haiku, one of the shortest forms of poetry in the English language with renowned Haikuist Barbara Strang. Free, but bookings are required. Book your space.
Browse more haiku resources.