I am well into the morning-after glow of having spent an evening in the company of Lee Child, Paul Cleave and 750 of his Christchurch fans - and what a night it was! This is my first WORD Christchurch event - this one presented in association with Penguin Random House New Zealand - and I couldn't have asked for a better author to kick off with. Lee Child is funny, intelligent and relaxed as he responds to Paul Cleave's questions. He looks every bit as he does on the back cover of his books too. Now don't worry - there are no spoilers for Past Tense in here - nor were there any in the interview, thankfully. I am still only part way through the book so I would have been gutted if it had been discussed in depth.

Have you ever wondered if Lee Child is channelling any of himself into our favourite character? Turns out that he is. He has gone out and experienced moving around the States as Jack does and has a similar dislike for technology. He also told us that other than the leather jacket and boots that he was wearing on the night; everything else will find itself in the bin in a few days and he will leave with new clothes. The basics aren't expensive - he's tried expensive clothing and found that they look the same anyway. And yes his jeans go under the mattress at night!

But this isn't something that we will have to continue to grin and bear for any future films. That's because there won't be any. It was in Lee's contract with the studio that he could opt out of any future movies once two had been made. So he has. Instead we have something much more worthy to look forward to. A TV series! He has just signed the paperwork to put Jack Reacher onto the little screen and I for one will be happily bingewatching it. If luck has it, there will be 8 seasons which will incorporate 24 books - 3 per season. One book will be chosen as the main theme and the other two will be cannibalised to round out the episodes. Can't wait to see the result.

It was nice to see Lee graciously accept the book of a first-time author from the audience, when he was offered it. I had the impression that he genuinely supports up and coming talent. He does however, heartily disapprove of a well established author who quite blatantly kicks off a series with a character who is a bit of a dead ringer for ol' Jack. David Baldacci... you know who you are! Amusingly, Lee didn't take this affront lying down and is openly disparaging of such behaviour. He even went as far as to name a couple of his minor characters Baldacci and made sure that Reacher got a chance to punch them in the face. It seems that was enough to assure the absence of David Baldacci at some book events that he and Lee Child were due to attend together. Better watch your back DB! 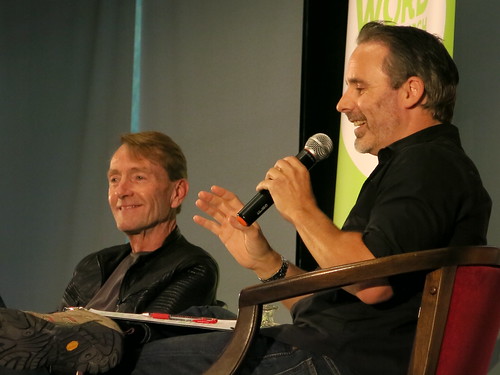 So, 'how does he remain as thin as he does?', was one audience member's question. Lee has discovered that stoking the fires of his creativity is as simple as keeping himself hungry. He writes better like this. He puts it down to some primal part of his brain that is activated when he is hungry - and it's no doubt trying to imagine what it will have to do in order to hunt and forage to fill this need. Deep stuff.

So even though food doesn't play a huge part we can rest assured that he is consuming copious amounts of coffee. This stuff must be running through his veins as it's not unusual for him to consume 36 cups of coffee in a day! 36! Mind blown! How on earth does he sleep at night, I wonder?

So that was my night with Lee Child. It was a very entertaining time that was had by all. And no I didn't hang around for my book to be signed, because I didn't have a couple of hours to spare! Maybe next time.

Time to immerse myself back into Jack Reacher's world - Past Tense here I come!

"Every day I want to sit down and think 'Wow what's going to happen next?' @LeeChildReacher on writing Jack Reacher. He has the sold out audience in the palm of his hand. Thanks Lee, and host @PaulCleave, @wordchch and @PenguinBooks_NZ. pic.twitter.com/KUGgERVsFp

Find more books in our collection by: