“Books Unite Us. Censorship Divides Us.” Banned Books Week is an international event celebrating the freedom to read and here at Christchurch City Libraries, we like to give the readers the choice on what to read – or not to read.

Banned Books Week was launched in 1982 in response to a sudden surge in the number of challenges to books in schools, bookstore and libraries in the United States of America. Every year, the American Library Association’s (ALA) Office of Intellectual Freedom compiles lists of challenged books as reported in the media and submitted by librarians and teachers across the country.

In our incredibly connected world, we’ve seen the growing number of news headlines as books are challenged and removed from schools and public libraries. But what does book banning and censorship look like here in New Zealand?

You’re probably familiar with the classification of films and videogames as G, PG, M, R13, R16 or R18. Did you know a book can be given one of these classifications or even banned from coming into New Zealand?

That’s what happened between 2013 and 2015 with Ted Dawe’s young adult novel Into the River, which was submitted for classification, appealed and reclassified, sent for reconsideration and restricted for sale and distribution, and finally classified (again) as being Unrestricted. Phew – what a journey! You can see a snapshot from that time in this 2015 blogpost, and in this summary of the Into the River classification controversy.

But New Zealand has a much longer history with censorship. The Customs Act 1858 banned the import of ‘indecent’ material. What was ‘indecent’ or ‘obscene’ was largely left up to the discretion of the customs officials or police. This was followed by the Offensive Publications Act 1892 and the Indecent Publications Act 1910, which attempted to help magistrates decide whether material was offensive. The 1910 legislation also allowed police to search premises for indecent material “whether by day or night, and if necessary to use force by breaking open doors or otherwise”.

New Zealand Customs, using the Indecent Publications Act 1910 and their powers under the Customs Act 1913, would seize any material they believe ‘indecent’ as it was prohibited from being imported. Booksellers and libraries would find shipments of their books stopped at the border.

With the Indecent Publications Act 1963, the Indecent Publications Tribunal (IPT) was created to take decision making away from the Customs Department and magistrates. The tribunal was made up of a High Court barrister or solicitor and four other members, two of whom had qualifications in literature or education. Until the Classification Office came along, the IPT had the job of deciding whether a book submitted to them was ‘indecent’ and should be banned.

You can also discover a variety of historical booklets and books about New Zealand’s history of censorship in the Aotearoa New Zealand Centre Collection on Tuakiri | Identity, Level 2, Tūranga.

What happens at Christchurch City Libraries?

Christchurch City Libraries has a Content Development Policy that guides the selection and management of resources we collate and collect. Within this policy are two core values:

Within our Content Development Policy, you can see the guidelines for how Christchurch City Libraries selects and deselects (known as ‘weeding’ by librarians) materials.

Where can I find books that have been banned or restricted?

At Christchurch City Libraries, we hold many titles that have been previously banned and are now legally unrestricted – both in New Zealand and outside of it! Items that are age restricted (of which there are few) can be accessed by placing a hold through our website so long as you meet the legal age requirements. If you are not sure how to place a hold, ask a local librarian to show you.

Take a look at the list below to discover some of the many titles which used to be banned in New Zealand or are currently classified.

Photos of the Banned Books display in Tūranga on Hapori 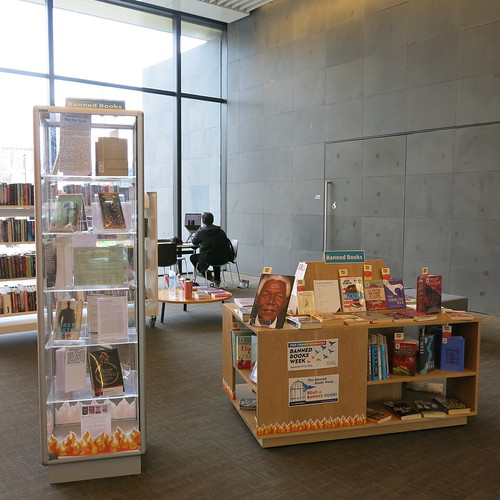