Initially, the review in the publicity doesn't give away much, but I was intrigued by the title and so we gathered in the wonderful space that is the Little Andromeda Theatre to be enfolded in the warm, comforting (metaphorical) embrace of MC and Concept Curator, Ray Shipley.

The storytellers were Eamonn Marra, Laura Borrowdale, Tusiata Avia and Pip Adam, but Tusiata Avia was unable to attend so she sent a substitute, Ana Mulipola, to read her story. If this was test rugby, she would be an "impact player" off the bench. This fine ensemble of Aotearoa storytellers was joined and, indeed, enhanced by Toby Morris who illustrated the proceedings in real time. Toby is well know for his work in The Spinoff.

Ray pointed out that bedtime stories can be gruesome and not at all like the sanitised versions with which Disney has flooded the 20th Century.  They have read two recently, one in which a bear murdered a bunny for an ordinary red hat that he could have purchased at K-Mart, the other in which a family of insomniacs were forced to live their lives at night and so were cut off from all sense of community. Ray made the observation that it wasn't so much the content of the stories that were designed to soothe at bedtime, but the act of reading the story aloud, a shared and communal activity that gave comfort to the anxious child or adult.

Eamonn Marra warmed us up with a very funny story about a character called Doug Theodore. Eamonn's anxiety were reviews and his ultimate anxiety was being reviewed for something he was unaware he was being reviewed for. Doug Theodore lived alone, had a new nose-hair trimmer and, in his youth, had played in a band called Butts for Hands. Doug finds one day that a newspaper, "a dying format", has reviewed his personality on Page Fourteen. Initially, the newspaper reviews Doug's somewhat anally-retentive personality negatively, but the conclusion of the story comes when Doug's colleague turns to Page Fifteen and finds the review pointing out Doug's good points.

Between stories, Ray encouraged the audience to do a big inhale and a big exhale.

Laura Borrowdale, editor of erotic fiction journal, Aotearotica, read her story, "Last Drinks", a somewhat apocalyptic tale riffing off her anxiety over the Covid-19 Lockdown. This story jumped between an adult party and a domestic scene of a woman feeding, bathing and putting her two children to bed. I really enjoyed this story because it was a textbook example of "show not tell" with things hinted at, but never spelled out. We are left guessing even at the ambiguous conclusion. Has her husband, Tom, been too cowardly to prepare for the end? Has he left his wife, the narrator, to poison the children and the family dog? Has the world become so awful that the Aotearoa government of the day encouraged some kind of mass suicide of the population?

We needed a big inhale-exhale after Laura's story, but not in a bad way.

Tusiata Avia's novel extract was read by Ana Mulipola. It was called "I Dream of Mike Tyson" and involved a young Samoan girl yearning for love who lived with a harsh, traditional Aunty. Sunga hangs out at night with two fa'afine, Whitney and Tina, who take their names from Whitney Houston and Tina Turner. She has to sneak out at night to avoid the demeaning discipline of her Aunty. These three characters pick up palagi sailors in the Seabreeze nightclub and take them for sexual acts to Tomosina, a small island created by the high tides. Sunga really just wants someone to love her and she doesn't want to be involved in meaningless sex acts. She yearns for escape, but when caught sneaking home by her Aunty, she suffers an unwarranted fate when her Aunty visits a traditional punishment on her with a pair of scissors.

Pip Adam concluded the evening with a sci-fi tale about fifteen giants exiled from Earth in a spaceship. It was narrated by Alba, one of these giants, who tells the readers that there are 500 of such spaceships sent into space with fifteen giants on board each ship. The normal size people have sent the giants into space so the reduced gravity will cause them to enlarge until their bodies explode. It is "a cruelty no one would see". Alba is joined in conversation by Bess and Talia, two other giants aboard the spaceship. Alba asserts that "no one knew the physics" of this cruel solution to the problem of an overcrowded Earth, but these three giants assert that it is "their job on the ship to make noise", a noise sadly that no one but the victims will ever hear.

And then we were ushered out into the evening, our anxieties, if not soothed, at least placated for awhile. 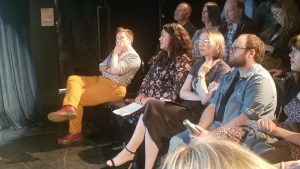 All photographs by Andrew M. Bell