Photo Hunt 2019 was an outstanding success with a record number of entries — 543!

It is the first year that all the entries were uploaded to the Discovery Wall. The images can viewed online, and on the Discovery Wall in Tūranga - as well as at the mobile wall that is at Parklands Library until 10th January 2020.

Spark was our prize sponsor this year and they nominated the Spark Choice award. Thank you to Spark for your support.

How do you pick a winner from over 500 entries? We looked for a story and a photo that added something new to our collection. An image that ask questions or depicts an aspect our social history.

Take the time to view this year’s Photo Hunt submissions. You can contribute to our collection anytime by joining up to the website, or we can scan photographs for you if you drop them in to your local library.

The judges selected this as the winning image for the 2019 Photo Hunt.

This photograph gives us an unique insight into the 1970s workplace. It shows a part of our social history that many of us have forgotten, and few documented.

The image shows the rotary dial telephones and the lack of modern technology that were in place in the Christchurch Stock Exchange of the time, and the men are sitting directing the woman what to do.

Great photo of 1970s fashion outside the iconic Ferrier fountain and Town Hall, which had recently opened.

Sitting room at 277 Riccarton Road. Mother, 3 older brothers sitting on small log boxes on either side of an open fire. Mother's friend and two children. My father at the train set. 1945/46

This is more than a photo, it’s a historical object in itself.

Family and friends by the fireside with children playing trains and mothers knitting. Immediately post war, the viewer asking, “Are the fathers ok? Did they come home from the war?”

Photo taken by my father Peter Basire (a photographer) from his collection of Lake Lyndon or Lake Ida. An unique action photo taken of skater jumping over 2 other skaters crouched on the ice.

A great action shot showing people having fun in the snow that also leaves the viewer wondering if he made it and landed well!

Photo shows my mother Phyllis Leslie water skiing at Taylors Mistake. The photo was probably taken by her boyfriend, Irvine Arrow, from the boat "Himi"

Really like this image of a young woman having fun on a homemade ski and unusually taken from the boat at such an early time of the 1920s. Showing that woman have always been sporting and adventurous.

Looking down on the intersection of High Street, Hereford and Colombo Street.

Ron brought in a large collection of central Christchurch photographs taken in the 1960s and 1970s. Mainly of buildings these are special photographs as they are colour and often taken from elevation.

Ron’s photographs are an important addition to our photographic collection as they show our city at a time of change. They are even more significant in that they record a past Christchurch during a time of redevelopment that has since been redeveloped or lost due to the earthquakes.

A photo of my father as an apprentice boy aged about 13 years outside his place of business on the corner of Liverpool Street and Cashel Street. About 1923

Visually, interesting angles and the sign writing make it a winning entry.

Also makes the viewer wonder if they actually wore their suits while ‘vulcanising’.

In 1951, as young men, Theo Van der Kroon and Gerald Hemelryk arrived in New Zealand from the Netherlands. They were both highly qualified in designing and creating men's clothing. Six months after their arrival, they started a business under the name of Tasman Tailors. Their first shop was situated on the corner of Colombo and Kilmore Streets, now the site of the Christchurch Town Hall, and soon became well known for tailoring high end, quality menswear. Their customers comprised of local judges, lawyers, businessmen, ballroom dancers, New Zealand artists and musicians travelling overseas, to name a few. Of Tasman's accolades, they were three times winner of "The Best Dressed Man" competition in Christchurch. The company successfully operated for a total of 43 years

A well-known Christchurch business and the owner, with an interesting story accompanying the photograph along with showing a part of town that was completely changed when the site was cleared to build the Town Hall in the late 1960s. 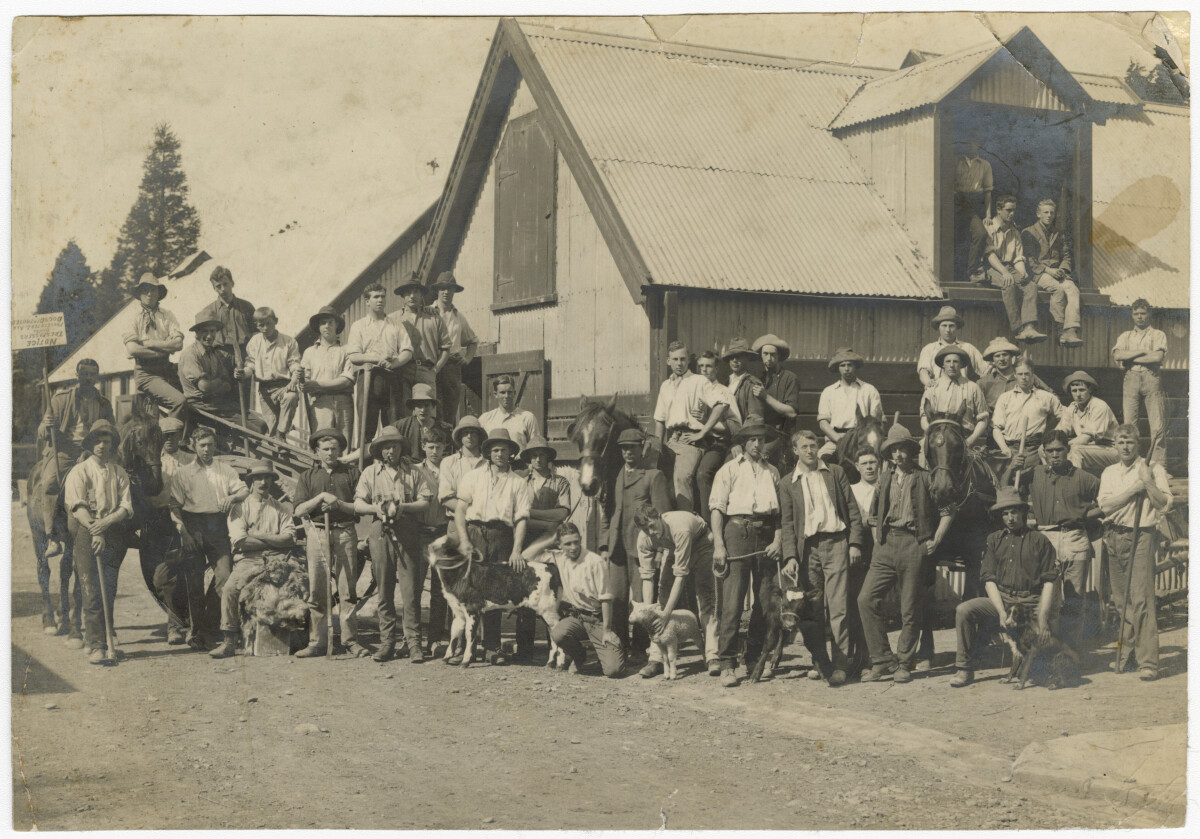 We didn’t get very much information with this entry and the submitter didn’t want their name displayed, but a good image showing some early students Lincoln.

This year we received several collections and albums, including early 1900s postcards of Christchurch landmarks and of the 1906 International Exhibition.

Fredrick was a keen outdoorsman and photographer and documented his trip over to the Westcoast. His album also has photos of Christchurch places and buildings.

As a collection it shows early 1900 Canterbury countryside and we are thankful to the family who have shared Frederick’s photographs.

Special mention also to Sally Martin’s collection of 1970s photos of a Farmer’s fashion shoot. The photos show the very stylish fashion of the late 1960s and 70s.

Sheyrn Harkness has shared a large number of photos of her family in Lyttelton and Christchurch from 1888 – 1950s. They tell a story of migration, families, school and life in Christchurch. Sheryn has given us insight into family life with her comprehensive descriptions.

Ron Cone’s collection is extensive and unique and we are still in the process of uploading the images. The 28 photographs that are available for viewing show 1950s Christchurch.

This year Spark sponsored many of the 2019 Photo Hunt prizes.

Congratulations to all the winners and thanks for your entries.