For You(th) was something very different on the WORD Christchurch Spring Festival 2020 line-up. For one, there were no author readings or panel discussions. Instead, For You(th) consisted of five activities chosen by a team of seven young people – the Word Youth Jury. The overall theme of the event was to create spaces where young adults could learn new skills, meet and mingle, and generally relax.

In the Facilitation Space on Auahatanga | Creativity, Level 4 you could meet Kay O’Neill, a graphic novelist, surrounded by soft-toys of their characters Chamomile and Jasmine. Kay's first graphic novel – Princess Princess Ever After – is a super sweet queer fairytale for children which first appeared on their tumblr blog before being published on Oni Press. They then went on to write The Tea Dragon Society, which won an Eisner Award and a Harvey Award, as well as several sequels and two stand-alone graphic novels – Aquicorn Cove and Dewdrop.

Kay’s iPad was connected up to the Ricoh Screen which meant as they sketched in Procreate, those around could watch on the bigger screen. When I arrived, a small group of teens were sketching and chatting about what schools they were at and – in the true spirit of New Zealand’s 2 degrees of separation – if they knew this person or that the year above. As I curled up in a beanbag one young teen showed me how to use the Perspective feature on my iPad’s Procreate, having been playing around with it on her own.

Nearby, a table in the Production Studio was packed elbow to elbow with people creating zines. The table was covered with so many markers, gel pens and paper it was difficult to catch sight of the wood underneath. Members of the Youth Jury and avid zine fans happily taught new attendees how to fold their very first zine. 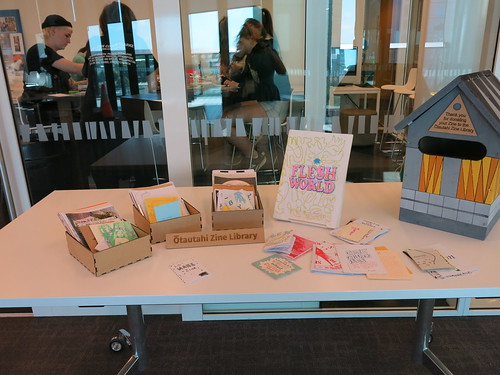 At the other end of Auahatanga, a group of about 6 teens were silently working around a meeting room table as young adult author Karen Healey perched on a stool timing their current writing challenge – how to convey information without too much exposition. Karen Healey’s dystopian When We Wake was a finalist for the NZ Post Children’s Book Awards. As a full-time teacher and a former Ursula Bethell Writer in Residence, the group were in good hands. Throughout the afternoon, Karen and the group worked on a variety of writing techniques to help improve their stories.

The final activities that made up For You(th) were a chill-out area and a board game station. More events are recognising the need for low-sensory areas where attendees can get away from the hustle and bustle to decompress. Along the southern roof-top garden members of the Youth Jury made a space for relaxing in beanbags. Out in the garden, a tight group of teens laughed and chatted in the sunshine. Meanwhile on Hapori | Community, Level 1 members of the Youth Jury played Scrabble at table in the Youth Space. Hapori is home to a board game collection that anyone can play within the library.

As anyone who’s run events for teens will know, they’re an audience whose attention is difficult to capture. Having activities designed by teens, for teens makes a huge difference – not only do you feel safer than you have an activity that teens will actually like, you’ve got guaranteed attendees too. Speaking with members of the Word Jury they loved being able to work on and attend an event for them and their friends. With one attendee, we chatted about how too often activities are free for the under 13s, ticketed for the adults, and then nothing offered for the high-school and uni age group in between. There’s something special about being able to learn, create, and talk with those in your own age group – something that For You(th) achieved wonderfully.