Aspiring by Damien Wilkins won the Young Adult Fiction prize at the 2020 New Zealand Book Awards for Children and Young Adults. I asked Wilkins about his favourite authors and books, about the South Island setting of Aspiring, and what he keeps in his junk drawer (among other things).

You’ve written lots of different types of things: poetry, novels and short stories, and TV scripts. Do you enjoy one over the others?

Not really. They all have slightly different demands. It’s a bit like cooking—which I also enjoy—in that sometimes you want to make something complicated with a lot of ingredients and sometimes you want it to be quick and possibly unhealthy.

How did you find the change to writing for young adults?

It was fine once I put aside the idea I was writing “FOR” a group. I didn’t adjust my language or my brain but maybe only my focus. The story stays in the lives of its younger characters whereas in my other work I would probably follow, say, the parents’ lives more.

What sparked the idea for Aspiring?

Trips to Wanaka and thinking about the kinds of future which are on the horizon for (and already here for) young people. Scary stuff. But also with the potential for joy and change.

Aspiring is a made-up name for a place that bears a striking resemblance to Wanaka, right?  Why not just set the book in Wanaka?

I wanted the freedom to get things wrong while still bouncing off the coordinates of a place like Wanaka (near the mountains, with a lake, reliant on tourism and retirement).

Even though Aspiring is fictional, the New Zealand setting is very clear. I have vivid memories of the first time I read a book with a setting I knew and recognised, and the excitement of knowing exactly where the character was. Have you had any similar experiences reading New Zealand stories?

Yes! Frank Sargeson, Janet Frame, Maurice Gee – they did that for me. That said, I also loved American fiction. I’m not sure why but I always felt William Faulkner’s creation of a district in the Deep South chimed with growing up in Lower Hutt in the 1970s, even though we had no wagon wheels or cotton fields and didn’t say ‘dammit’.

Do you have a favourite NZ author?

I have a lot of favourites, such as the above writers, but also the poets Bill Manhire and Jenny Bornholdt, and fiction writers Barbara Anderson and Nigel Cox. Then there’s a whole wave of newer writers such as Breton Dukes, Tayi Tibble, Lawrence Patchett, Tracey Slaughter. The literature of Aotearoa is so vast now.

What books did you enjoy reading when you were about Ricky’s age?

Thrillers mostly – Hammond Innes, Alistair MacLean. I was probably 17 when it got heavy and existential with Jean-Paul Sartre, Camus, Jean Genet. I think my mother was worried.

What have you read lately that you really enjoyed?

The Gateway Arch is a curious monument. What prompted you to include it in a book?

Because I lived in St Louis for two years and we visited the Arch several times. Somehow it stuck in my mind. It’s a beautiful thing but I don’t think it has any real relationship to the place. It sits on the banks of the Mississippi in the downtown area. It always felt as though it had been erected by sophisticated aliens in the night.

It was interesting reading about the experiences of the Christchurch earthquake through the eyes of various characters. Is the earthquake something you experienced first hand?

No. I’m relying there on terrifying first-hand accounts of friends. 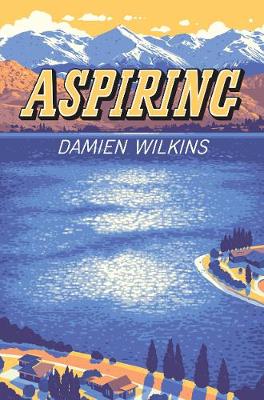 What prompted you to include those stories?

As a Wellingtonian, earthquakes are always present, even when they aren’t happening to us. They’re part of our world, inner and outer. There was some sense that Christchurch had got ‘our’ quake. Also, the stories I heard were so vivid.

I really liked the description of Garth’s house with his drawer of USB cables and his collection of Smurfs! I’m sure your house has one of those drawers (we all have one, don’t we?) What is the most surprising item in your junk drawer?

A little tool for repairing the greens on golf courses.

And finally, If you were a Smurf, which Smurf would you be?

I have no real knowledge of Smurfs! But we once stayed in a house in France, owned by a German, who had decorated the entire place with them. In my novel I transported the house to my invented South Island town. The power of fiction!