Just think: What is the worst that can happen?

At his two sold-out talks, hosted by the WORD Christchurch Writers and Readers Festival 2016 on the 16th and 17th September, popular children's author Andy Griffiths of the Storey Treehouse book series kicked up a (brain)storm session with his audience.

“Who has ever blocked the plug in the shower and let it fill up as much as you could just to see what would happen?” asked Andy. How did he know?! I glared at my son in the seat next to me who does this all the time! (And even brings tin foil into the shower to keep it sealed in). Andy asked his audience to imagine a shower was filling up with water with the doors sealed shut with silicon... "How would you get out?!" He was milking the audience for their ideas. It felt like a riddle to solve - one that he doesn't actually know the answer to but is making up as he goes along.

In the Treehouse series the two main characters Andy and Terry (named after the author and illustrator Terry Denton) get up to some ridiculous stuff that would horrify a health and safety inspector. Andy says “It would be no fun if I had my characters think ahead about the consequences to their actions. A sensible forward-thinking character is a useless character who doesn’t belong in a story.” What he needs are “idiots who never think ahead.” Andy adds: “My job as a writer is to stop my characters from solving problems.” Andy also loves to do what he calls “wasting the reader’s time” – as witnessed by endless pages in his books with the same word written over and over and over and over and over and over...

Dressed in his finest fake tuxedo t-shirt, Andy spoke to hundreds of fans in New Zealand to coincide with his newly premiered book The 78-Storey Treehouse: Movie Opening Night (2016) about the making of a movie about Andy and Terry 's adventures (but Andy's kicked off the set). Oh, and it features spy cows that go around stealing ideas from them. Their justification? "For years the humans have milked us. Now we're milking them, for their ideas."

"So how do you get your ideas?” – an audience member asked Andy. “I steal them!” he confessed. “Haven’t you ever heard of Enid Blyton’s The Faraway Tree?” he joked. Seriously though, he loved the feeling of expansion and freedom when he read The Faraway Tree books years ago and he tries to copy that feeling. Playing in trees is inherently dangerous – and he keeps his that way by not putting fences around the crazy levels they build such as a chain-saw juggling area and crocodiles under a skateboard ramp. His storytelling advice is to ask: “What is the worst thing that can happen?” and to “think the opposite of what would happen and do that.” He says he does the opposite of what the reader expects because shock and surprise equals reader laughter. “I never underestimate my readers’ stupidity.” He means that in a nice way.

Now back to that shower rapidly filling up to the ceiling with water, and you trapped naked inside: “What would you do? All you have is a rubber duck" he said, waving a rubber duck toy in the air. He suggested using the duck's squeaker as a distress signal to call emergency services (it didn’t work by the way, he tried it live). You could plug the shower head with the duck but it would fill and expand and being killed by an exploding rubber duck, he says, would be an embarrassing way to die. "What's the worst that could happen?!?" You could break your way through the ceiling by hammering it with the rubber duck but then get trapped in the ceiling and float through the roof space until you came crashing down naked into your sister's sleepover party. Humiliation overdrive. In case he hasn't made his point with his young readers (and potentially budding writers themselves): "It’s all about brainstorming."

Another great way of generating ideas? Making lists – such as the lists of what kind of levels they could have in their treehouse - a bowling alley, a game of snakes and ladders with real snakes and, in The 78-Storey Treehouse, what about an all-ball level for sports fans? Including fire balls and wrecking balls. There's also Andyland, Terrytown and Jillville (to home the Andy, Terry and Jill clones left over from the previous book), a combining machine (eg. electric eel + unicorn = Electricorn) and a Scribbletorium.

Speaking of scribbles, Andy shared with everyone Terry's early drawings of their treehouse complete with marshmallow machine and vegetable vaporiser and certainly their most dangerous hazard of all, their publisher Mr. Big Nose whose nose explodes when he gets angry, usually caused by Andy and Terry not making another deadline on the book they are meant to be writing. Andy's character tends to get a bit cross in his books too which just makes Terry funnier.

Hands up - who likes Terry better than Andy? About half the room. Andy says he has to be mean to Terry since he steals his chips and that’s why he had to create a high-security potato chip storage facility in his latest book, complete with 1000 mousetraps, 100 lasers, a 10-tonne weight and an angry duck – to deter those friends and family who like to steal our chips from us (you know who you are). In real life, Andy and Terry endlessly amuse each other – into their third book in the Just series (Just Crazy, Just Stupid etc…) they felt they just didn’t have enough bad ideas and were having trouble getting a book together ...so how about a book about a book that never gets started?

Andy showed a few slides of amazing, and amusing, trees and treehouses. A child in the audience reprimanded him for his picture of a tree that looked like a bum: "That's inappropriate!" He joked back: “You have to do some serious introspection when a six year-old tells you that you are inappropriate.”

Andy says he has been writing since he was about 5 or 6 years old. He says one of his earliest 'books' he made was a get-well card for his dad that read "Get well soon ...or you are doomed” with a drawing of a tombstone. Andy reminisced about how when he was a child he read cautionary tales - German tales from the 1800s such as Heinrich Hoffmann's Der Struwwelpeter – and similar to Hilaire Belloc's cautionary verses - unlovely bedtime stories - about what frightfully horrible things can happen to you when you play with matches or suck your thumb. And did that teach him to be a good boy? No! That taught him that “Reading is cool." "I don’t know what will happen when I read!" he enthused. The same can be said about his stupendous stories.

Joking about all the dangers in his books he says that’s why he came to New Zealand, because there were no scary things, like poisonous spiders… um, uh, Andy! Watch out! The audience were quick to educate him about the redbacked spider and the katipo. Andy said that he doesn’t believe in cruelty to animals in his books but an audience member called him out: “But what about when the shark is fed Terry’s underwear?” Well, Andy points out he had Jill (their animal-whisperer sidekick) perform open-shark surgery to save it. Andy says the moral is: “Don’t wash your undies in a shark tank – or just don’t wash your underpants” full stop. Andy Griffiths doesn’t miss a beat.

“Is Jill really your sister?” someone was desperate to know. "Let’s hope not! I'm married to her in real life” said Andy, who met his wife Jill Griffiths in 1997 when she was the editor of his first book Just Tricking and was quick to add that Jill is funny in her own right (she composed the Ballad of the Ninja Snails in The 52-Storey Treehouse). He says Jill stops him from taking his jokes too far (although I'm not sure how much further they could go).

“Will there be an actual Treehouse Movie?” an eager fan inquired. “Not so far” answered Andy, sounding unsure how his books would translate on screen. But is he working on another book? He did some quick mathematical calculations (adding 13 to 78) before confirming that, yes, a 91-Storey Treehouse is under construction - due to be built by August 2017. Great news! Because the worst that could happen for fans is that Andy and Terry stop reaching to new heights.

Thanks to publishers Macmillan and WORD Christchurch for bringing Andy to town. Missed his appearance? Watch Andy and Terry in action at the Melbourne Writer's Festival 2015

See our photos of Andy Griffiths in Christchurch. 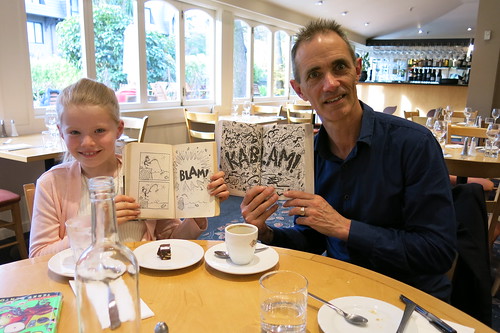