We are asking quick questions of writers and thinkers coming to the WORD Christchurch Writers and Readers Festival on from 24 to 28 August.

Helen Lowe is a Christchurch-based novelist and poet. The second book in her The Wall of Night series won the Gemmell Morningstar Award 2012. Book three Daughter of Blood was published earlier this year.

I am a Christchurch person, but I have to say that the "what I like about it" question is one I often struggle with in the post-earthquake environment. However, one thing that I have always loved about Christchurch is its wide and very blue skies -- not infrequently very blue, at any rate. I also love its trees, especially the city's heritage of English trees and the seasonal change and interest they bring to the landscape. So that is why I can't help feeling really sad when I see them being cut down so indiscriminately in the central city in particular, where greenspace is being replaced by sterile (and very expensive) stonescapes, all purportedly in the name of "recovery."

I love libraries and always have done so. A little like the wardrobe that leads into Narnia, they open doors into so many fantastic worlds. Long may they continue, say I -- and I hope the Crown frees up the land they promised in the central city very soon (in exchange for the old library site going to the convention centre project, I believe), so that the city's new central library can finally get underway! Nearly six years without a central library is quite simply, six years too long.

That is such a hard question because of course there can be only one...So that means we're talking about a book I would never get tired of, no matter how often I read it. For that reason, I think it might have to be the Pears Encyclopedia I've had since I was a child. It's compact in size but full of all sorts of useful information, including basic medical information, a full collection of completely out-of-date maps, which in itself renders them interesting, as well as a section on the Greek myths and legends that I loved as a child and still find a very useful reference.

I always think that I am the world's most unsurprising person, although that may only be because I have an insider's low-down on all the Helen Lowe facts so do not consider any of them surprising. Although sometimes, harking back to Question One, I suspect it may be surprising that I still live in Christchurch despite all that the earthquakes and their aftermath have visited upon us. 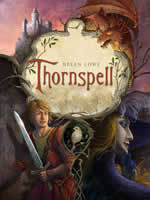