This page details the history of the trophy, and links to related resources at your library.

In 1948 options were being investigated for road racing near Harewood, Waimari County. Plans were made to stage a road race, but 10 days before the event police deemed closure of roads by county officials illegal. It took the intervention of Prime Minister Peter Fraser to allow Wigram Air Base to be used for the Formula Libre race, where cars of different makes, models and configurations could be freely raced against each other. The track therefore became the site of the country’s first road race. 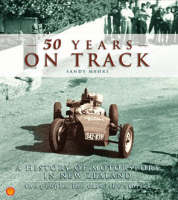 In 1949 Sir Henry Wigram’s widow Agnes presented the Lady Wigram Trophy for competition in an international motor race held at the track. Some of the fastest open-wheel vehicles in the world raced the track — Ferraris, Alfa-Romeos, Coopers and many other marques hurtled around corners lined with oil barrels and hay.

Notable among the field was Sybil Lupp, driving an MG. She placed fifth in both the handicap and the championship events, and received a cheering reception from the crowd. Another MG, driven by M J Parker of Christchurch, crashed during the race, but the driver was thrown clear and uninjured.

The paper describes the track as excellent, with the only hazard being one small ditch near the control tower which sent several of the lighter cars jumping, all four wheels off the ground, as they passed it.

The Lady Wigram trophy has been won by some of the most famous names in motorsport — Jim Clark, Jackie Stewart, Jack Brabham and Bruce McLaren to name a few.

Plenty of household names in New Zealand motor racing circles also cut their teeth at the circuit: Craig Baird, Kenny Smith and Paul Radisich all won the trophy, which is still contested, albeit in a different class of vehicle.

In later years the Wigram track was used for a variety of motor sport events from classic racing to Formula Fords and motorcycles. A natural follow-on was the Wings and Wheels Classic.

In 2009 the airfield closed and has now been redeveloped for housing. The Lady Wigram Trophy is now raced at Ruapuna Raceway.