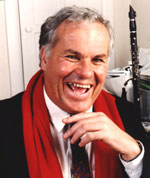 It’s supposed to be anything healthy and nutritious. Sadly I live in the middle of about twenty cafes, so favourite is whatever is immediately available. I sincerely hope no one follows this example.

I used to work for the St John Ambulance service in Auckland. One night we rushed into a house where someone was supposed to be nearly dead in bed. We raced into the bedroom, ready to start saving their lives. The person sat up in bed and asked us to get out. That’s when we realised we were in the wrong house.

Sports mostly; swimming, tennis, walking — mostly to the top of Mt Eden and back.

A whole string of amazing teachers and the books written by Robert Louis Stevenson. He wrote Kidnapped and Treasure Island. I read them both lots of times.

I liked sport and anything that didn’t have maths and arithmetic in it. It’s why I can’t balance my cheque book or do my tax.

Favourite subject: anything with sports in it!

Jesse Owens, the African-American runner who won his gold medals in front of Adolf Hitler, a dictator who hated anyone who wasn’t German. I would want to know what it felt like to see a bully like Hitler grinding with rage when someone like Jesse Owens won everything.

I like to entertain and tell stories. It just seemed to make sense one day to sit down and write them down, instead of telling them to people at parties.

Yes, I have a little office full of reference books, a computer and piles of — messy — files and paper.

Best thing: when a book or a play comes out.

Worst thing: when reviewers who have never written anything themselves attack the book or play.