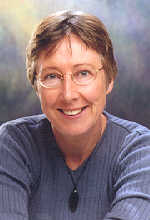 Today I really fancy a b.l.t ( with mayonnaise rather than butter). Mmmmm! But tomorrow it might be a crisp, juicy, Cox’s Orange pippin apple, or a piece of Kikorangi cheese on a sesameal cracker - oh my mouth is watering at the thought. Even better, a slice of that apple on top of the Kikorangi…. (it’s no good I’m going to have to pause to visit the fridge).

My name is Welsh and no one can pronounce it (except Welsh people). At school in England I was called Ear-less, Eye-less, Air-less - I was lacking just about everything! Having given me an unpronounceable name my father started calling me Eilidh (pronounced Ay-ley) - as if that was an improvement! It stuck and I was Eilidh for years. Now I’m just Eirlys. (Pronounced eye-ruh-liss - sort of).

Kissing was pretty embarrassing when I first tried it when I was fourteen. It was uncomfortable and awkward and I just couldn’t see what all the fuss was about.

I sit around with my children (four, aged from 13 to 23) and they make me laugh until I cry (they can’t take me anywhere). If they’re not around I read, walk and listen to music.

To be inspired by someone you have to think, “If I practised more or was braver, or didn’t mind what people thought - I could be like that person.” But to tell you the truth, I think I was nearly into my teens before I realised that I had any control or power over myself - that I could change things about myself. When I was little I just watched the world - and myself - as if it was a film unrolling. Bewildering, scary, sometimes enjoyable, but it always seemed completely beyond my control.

I lived in a dream, and didn’t do too well at primary school. I liked writing stories but my teachers were only interested in spelling, and neatly ruled margins and tidy handwriting. I was messy, my fingers were always covered in ink and I made big splotches on my books (we had old fashioned pens that had to be dipped into inkwells, and then you had to blot your writing with blotting paper). When I was 12 I got glasses and my world changed; I saw the blackboard and somehow heard the words clearly too, for the first time. About the same time I had a teacher who said I wrote interesting stories and I began to see the possibility of small moments of success… And it was about then I got a non-drippy pen too.

I hated Chemistry and Latin and did very badly in both (6% for chemistry). English and Drama were by far my favourite subjects - though for some reason I ended up doing Geography at university…

Do I have to choose one? Winnie-the Pooh, Orlando Buys a Farm, Little Grey Rabbit’s Christmas, The Long Winter, Ballet Shoes, The Children who Lived in a Barn; The Would-be-goods, Daddy Long Legs, A Parcel of Trees…

I suppose it was Ballet Shoes that I read the most often. Now it’s Winnie the Pooh.

If I could speak fluent Elizabethan at the meeting, William Shakespeare would be top of my list. I’d love to know what he was like.

Because I love making up stories. And a good thing about writing is that you can choose when you do it, unlike a lot of jobs which are not very family friendly.

I have my own writing room and I love it!

The best things are making up characters and giving them adventures and then seeing all that become a real book on a shelf in a book shop or library and knowing that the book now has a life of its own. There are people reading it that I will never know about - that’s a nice feeling. And I love getting letters from readers, and also going to visit schools. There are two worst things. One is the fact that writing is something you do by yourself, because I’m quite a sociable person and sometimes I would like some work mates. The other is the pay. Books earn almost nothing (unless you get published in America and Britain).

An actor maybe, or a teacher, or maybe an advocate for children. There’s a lot of attention given to people’s rights, but children often get left out.

Read lots, and write lots! And when you write, try and say things in your own voice, as if you were telling a story to a friend.

I think the most important rule when you’re writing or telling a story is - try not to be boring!