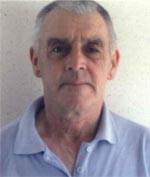 Only known as Mike.

I was taking some kids sailing. I stopped the yacht, jumped overboard to fasten a surf-board to a dinghy and the yacht sailed off leaving me alone on the surfboard. Fortunately the kids kept their heads.

Take the dog for a walk.

My Aunt influenced me to become a teacher. Also my parents were extremely supportive.

My favourite was History. I disliked Science (hated too strong a term).

To prove to myself that I could express my ideas on paper so others could enjoy them. The thought of writing a best-seller and becoming mega-rich is always lurking in the background!

Yes by the fridge in the kitchen. On a computer, overlooking the garden.

Best thing is receiving a letter saying someone’s accepted your story. Worst thing is suddenly realising the story’s lost itself somewhere and you’re wasting time on it.

I write as a hobby, I’ve heaps of hobbies: play music, fly a powered parachute, take photographs, dramatics. I only write when I suddenly get an idea.

I’ve only had about one in ten of my stories/books published. That’s a heap of effort. But seeing your story in print that’s a real buzz.

Don’t be disappointed. Be challenged.