It was decided to install the tukutuku panels in their rightful place during Te Wiki o Te Reo Māori (Māori Language Week) 22-27 July 2002. This timing coincided with the new Māori name given to the network of City Libraries - Ngā Kete Wānanga o Ōtautahi - translated as 'Christchurch Baskets of Knowledge and Learning.' The new name was adopted as part of the Libraries’ commitment to on-going bi-cultural development of services for Māori.

A blessing and unveiling ceremony for the tukutuku panels was planned in conjunction with the official launching of the new name on Tuesday 23 July at Ngā Pounamu Māori Centre in the Central Library. 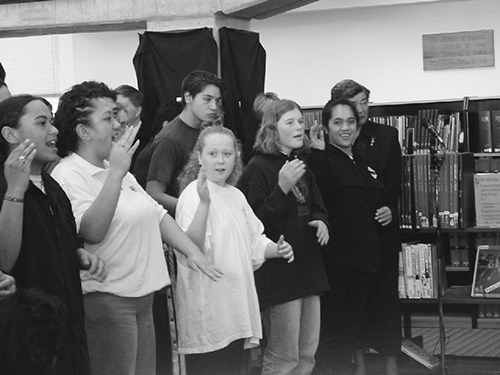 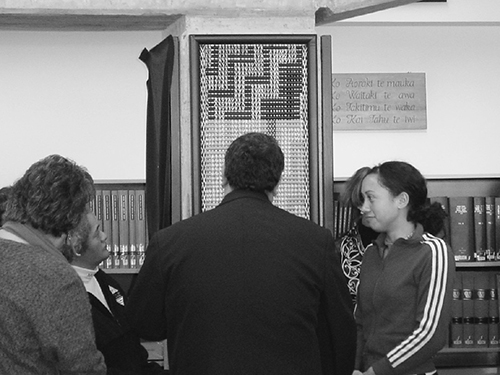 Figure 23: Hagley Community College members near one of the pillars with its black draped panels (left), and by one of their poutama panels (right).

The nineteen panels were individually unveiled by their weavers in a formal procedure conducted by the Rev. Maurice Grey, with the assistance of Maruhaeremuri Stirling. Members of the Hagley Community kapahaka group supported the occasion with waiata. After the welcome, the ceremony began at the entrance to Ngā Pounamu Māori Centre with the Aoraki panel being uncovered by students from Aorangi School. The young people were delighted when Maurice Grey joined in with them as they sang their waiata. The second panel, that was named for the late Helen Tabak, was unveiled by members of her whānau.

Gradually, the party moved around the room and around each pillar, revealing the panels and acknowledging the different whānau and groups that had given so much time and energy in their creation, and celebrating their achievements with waiata. In a move away from the more usual tradition, the last panel was unveiled by two men in acknowledgement of the work and support given to the project by a number of men in the community. The ceremony finished with the sharing of kai in the staff room.