This page features a recording of Matapi Briggs speaking about Tūtehuarewa marae in August 2004.

Matapi Briggs (Ngāi Tahu, Ngā Rauru, Ngā Puhi) was one of a large family of children who spent an idyllic childhood growing up at Koukourarata. Matapi left the bay aged 13 to work. Twenty-two years later she returned to the area to help re-establish a community focus around Tūtehuarewa hall which had lain unused for two decades. From 1975 she was actively involved with the Rūnanga, acting as secretary and spokesperson at different times. She was a regular attendee at monthly Rūnanga meetings and maintained a strong family connection with the area where some members of her whānau still live today. She passed away in 2009.

Memories of growing up at Koukourarata

The winding road that snakes its way upward from Purau Bay on the Southern side of Whakaraupō (Lyttelton Harbour) plummets suddenly from the summit into the quiet adjacent bay of Koukourarata (Port Levy). Tūtehuarewa Marae emerges at the end of the undulating road that skirts the shoreline. The marae buildings sit on the grassy hillside a mere stone’s throw from the pebbled beach and jetty that extends out into the calm waters of this sheltered bay.

Koukourarata and Tūtehuarewa are home to the peoples of Ngāi Tūhaitara, Ngāti Huikai and Ngāi Tūtehuarewa. The principal area of settlement and site where the marae stands today is called Puari. An older settlement called Kaitara pā was once located across the water on the shore opposite Puari. Huikai, one of Moki’s chiefs was the first Ngāi Tahu to settle at Port Levy. Huikai was the father of Tautahi after whom Ōtautahi (Christchurch) is named.

The rugged landscape and relative inaccessibility of the bay has contributed to Koukourarata being principally a peacetime area. On warm calm days the lapping water and still air exude an air of tranquillity that reflects this.

In the 1830s and 1840s Koukourarata became a prominent base for Ngāi Tahu in the aftermath of the Kāi Huāka feud and Te Rauparaha’s invasion of the South. Many Kaiapoi pā people sought refuge at Koukourarata and other locations on Banks Peninsula. The influx of Ngāi Tahu whānau resulted in a period of high population at Koukourarata that coincided with the arrival of the first Christian missionaries in Te Wai Pounamu.

Christianity became a part of life for many South Island Māori in the 19th century. Tāwao, a Māori preacher from the Wesleyan church brought Christianity to the people of Koukourarata in 1841. He taught and preached in the bay for several years with fellow preacher Hohepa Korehe. A stone monument in commemoration of Tāwao featuring a cross and plaque stands on the seaward side of the road as you head towards the Puari settlement.

Puari was the site of the earliest Māori Anglican Church in Canterbury — Te Whare Karakia Mihinare ki Puari. Bishop George Augustus Selwyn probably selected the site for the church when he visited Koukourarata in 1844. The original building made of wood or raupō was replaced in 1865 by a more permanent structure the timber for which was milled from church members’ trees. Used regularly for church services for many years, the church was a significant gathering point for the local community.

The congregation grew smaller however as the population at Puari dropped — many Ngāi Tahu who had sought refuge at Koukourarata moved away once the threat of war had subsided. Competition from alternative Christian teachings (Te Maiharoa in the 1870s and the Rātana movement in the early 20th century) further reduced the demand for church services.

By the 1920s the congregation had diminished to only minimal numbers and the last recorded service was held in 1926. The building stood disused for a further 20 years and was pulled down after falling victim to vandalism and fire.

A 50th anniversary memorial of the demolition of the church was held at Puari during Easter 1997. A commemorative stone with a brass tablet and wooden cross were dedicated in 1999 to mark the site where the historic whare karakia once stood.

The establishment of the marae at Koukourarata and the building of its hall were the work of both Māori and Pākeha members of the local community. The yachting fraternity held regattas at Easter and New Year and a local Māori Concert Party gave many acclaimed performances in Christchurch and Lyttelton to raise funds for the new hall.

The hall was built in 1924/1925 and named Tūtehuarewa after an ancestress. It is rare for a woman’s name to be bestowed upon a whare tipuna as this is customarily a male privilege (female ancestors are traditionally honoured in the naming of whare kai). Eighty years later, the people of Koukourarata continued their tradition of ‘erring from tradition’ when the time came to name their new whare kai. 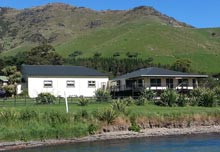 In 2004 a whare kai was added to the marae buildings at Puari. Built adjoining Tūtehuarewa, the whare kai, with its expansive windows, boasts a wide view of the peaceful waters of Koukourarata. At an official ceremony on the 3rd April, 2004, the building was named Te Pātaka o Huikai (The storehouse of Huikai) after the ancestor Huikai.

From Te Pātaka o Huikai and the marae grounds, the landmark island of Horomaka can be seen in the middle of the harbour. On the ridgeline at the head of the valley, the striking landmark, Te Pōhue (The Monument) is readily visible from the marae. When the mist descends upon this rocky crag it provides the setting for two local legendary tales of mist dwelling fairy folk (patupaiarehe) and tragic love.

Red Rock is the main wāhi tapu located within Koukourarata. Today, kaumātua recall being advised as children not to venture near Red Rock because it was a place where sacred things belonging to the old people were buried. Te Rūnanga o Koukourarata works to ensure the ongoing protection of these significant sites.

The entire bay of Koukourarata has Mātaitai Reserve status governed by Te Rūnanga o Koukourarata and the local Residents Association. Fisheries and water quality are monitored with the aim of protecting the kai moana within the bay. Koukourarata was once known among peninsula Ngāi Tahu for its extensive cockle beds that were the largest on Banks Peninsula. Cockles were an important food source and in recent years the Rūnanga and local communities have been working together on management of this traditional fishery.

Tūtehuarewa is the marae of Te Rūnanga o Koukourarata which has a rohe (boundary) that extends well beyond the bounds of Koukourarata itself. The wider area that the Rūnanga encompasses includes the eastern bays of Banks Peninsula extending as far as Pōhatu, near Akaroa. Tūtehuarewa is one of the five Ngāi Tahu Papatipu Marae located on Banks Peninsula. Today the marae hosts a range of wānanga and welcomes school groups and visits from all people.