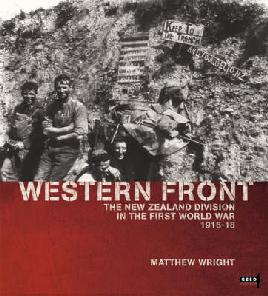 Macdonald, A. On my way to the Somme: New Zealanders and the bloody offensive of 1916
Includes studies of command, training, discipline, morale, environment, and tactics. It also looks at the role of Maori in the Somme offensive, and finishes with a chapter looking at the legacy of the 1916 offensive.

Malthus, C. Armentieres and the Somme
The Canterbury Regiment. The author served in France in 1916 as a sergeant, 1st Battalion, Canterbury Regiment, having previously survived the Gallipoli campaign (which he wrote about in his ANZAC: a retrospect). He was invalided home after being seriously wounded in the 3rd battle of the Somme, which began on 15 September 1916.

Passchendaele Battle in October 1917 in Belgium that resulted in horrific numbers of New Zealand casualties.

Sgt Henry James Nicholas V.C. M.M. Henry Nicholas was the first soldier from the Canterbury Regiment to be awarded the Victoria Cross. He died during the fight for the bridgeheads at the River Ecaillon near the village of Beaudignies, France.

New Zealand and the First World War: Western Front
New Zealand History Online presents information, maps and photos of the western front and New Zealander's experiences there including Passchendaele, the capture of Le Quesnoy and the Battle of the Somme.

The New Zealand Division in France and Flanders, May 1916 to November 1918: a contemporary diary of pilgrimages in their footsteps, by John H. Gray
Digitised version of the diary.