A very appreciative audience greated Paul Millar as he introduced Peter Simpson and his new book Bloomsbury South. Paul described the book as "highly scholarly" and an "elite coffee table book". I don't think I have ever seen an "elite" coffee table book and did spend some moments pondering what an 'un-elite' coffee table book might look like?

However, with all sorts of eliteness put aside I spent a very enjoyable hour as Peter Simpson obviously knows his subjects backwards and had many an interesting anecdote to share. He described a Christchurch that was a hotbed of creativity. People wanted to be here and to be part of the vibe! Artists, poets, writers, musicians, playwrights, publishers and actors abounded, sharing flats, painting each other and generally by the sound of things having a rollicking good time. 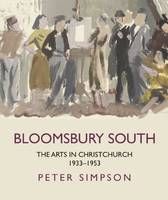 It would seem that every generation feels that they are the ones who are questioning the past and affecting change. It occured to me that this group in the 30s, 40s and early 1950s were an incredibly cool group of people. Other artists, writers and actors were attracted to come to Christchurch as word had spread that it was indeed a happening place. It must have been incredibly exciting and life changing for many. Peter Simpson described it as a "vortex of creative energy".

The book is beautiful, wonderfully edited and put together with just the right amount of photos. Peter Simpson has a wide view and takes in the politics of the time and ties all the artistic endeavours in with a good dollop of history and personal stories. Definitely a book to own and enjoy dipping into.