A good sized crowd turned out to have a good time. 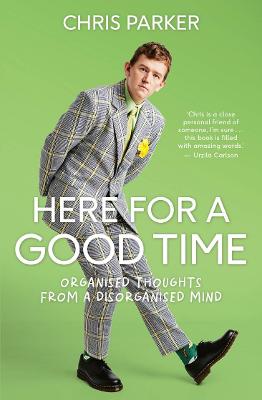 Chris Parker and Jason Gunn came onto the stage at their WORD Christchurch event at The Piano last night and it was all go from the start like two old friends catching up from where they last left off.

It turned out that they really didn't know each other at all, but had the connection of both going to Christchurch Boys High, "you can't shed Christchurch" and the childhood dream that Chris had to appear on McDonalds Young Entertainers (a show that Jason hosted in the 90s)  and to be a 'Super Trooper' -  the song and dance crew full of earnest talented kids who toured with Jason.

I had concerns that Jason's natural exuberance would overwhelm Chris - I shouldn't have worried. They bounced off each other beautifully, and in some ways, if it did become the 'Jason and Chris show' that wasn't a bad thing. There were discussions about the rules of comedy - "if it's true for me it's true for someone else", imposter syndrome, being vulnerable and, although nerves are a real thing, they are actually both at their best when on the stage.

Chris's family were sitting right in front of me and were a point of focus for Chris, often glancing at them as he talked, and acknowledged how family stories and round table conversations were great fodder for a comedian.

Chris had attended Toi Whakaari (Drama School) and found that a 6.4 tall, camp, gay man with a nasal voice and size 14 feet wasn't in huge demand, so he started to go out on his own. Already a stand-up comic, the pandemic gave him a captive audience via Instagram to use comedy to show all of our frustrations and worries and to bring light relief at a tough time.

Chris described the sheer slog of writing his book, Here for a Good Time, the challenge to reach the word count, and decided to "just tell it all". Home life had been dominated by the writing project plus preparing and doing live shows and a wedding to boot. I could really understand the need to come home and blob, to not have to be "on" and how this affects friends and families who enjoy and miss his energy. I suspect finding the balance could be a lifelong challenge.

A good time was had by all, and the queue to sign his book was a clear indication that it will be popular and a bit of hit.