Artist Robyn Webster talks about her installation Labyrinth in the Library.

Libraries are like enormous brains, filled with images, information, ideas, and memories. I liked the idea of inserting into the beautiful gallery space within Tūranga, another brain. A labyrinth.

In September 2019, in a collaboration with Cathy Irons, with her string trio Tri Cordia, we presented the opening concert for the new performance space and Symphony Orchestra practice rooms, the Ron Ball Studio. We developed the idea of symbolising the creative journey, the inward processes that go into producing art and music, as a new take on the Labyrinth. This involved large curtains made from stripped and plaited harakeke, overlaid to create a maze of varied depths and transparencies. I commissioned some dancers to animate the space, and it was performed as a celebration of the truly beautiful new part of our town hall. This was a sold-out show of one night only.

Thinking it would be great to extend the life of the labyrinth, we approached Tūranga. I made a whole new work for the Te Pito Huarewa – Southbase gallery. I also installed a version of the first Labyrinth into the library’s performance space for a short four days so that other dancers could work in it and created some new work in response to it. Because everyone has their own take on how they create, what their processes are. All these responses have been captured in film and will become a part of the installation once the library reopens.

The labyrinth stands for the mind, the inner self and personal psychology. It is where ideas, memory and experiences are interwoven and cross referenced, consciously and unconsciously, in order to generate a creative response. The depths of the mind are partly hidden and partly revealed. It is a place of neuron pathways, linkages and threads of connection. My labyrinth suggests a physical spaciousness which can be entered and explored, and like Tūranga itself, filled with ideas images and data.

View photos of Labyrinth in the Library on Flickr. 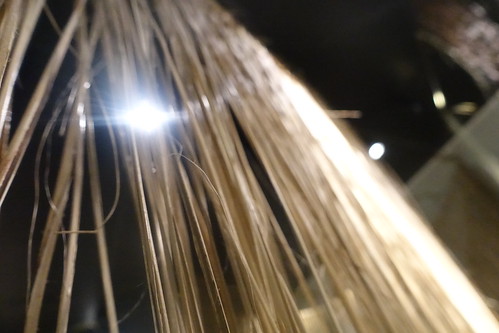 Labyrinth examines the concept of individual and collaborative creativity. Creating can feel very dangerous sometimes, and is certainly an exploration of the unknown. It is akin to the mythical labyrinth, from which we hope to emerge with a gift earned by the energy of our search. There is also a religious practice of tracing the preordained steps of a maze or labyrinth in order to find solace or understanding, by leaving logic behind and submitting to the intuitive. Labyrinth then also refers to the viewers' inner worlds, or brains, as the final, deepest layer.

Library staff suggested another collaboration, this time with the NZ Brain Research Institute, which proved very stimulating. We explored the difference in my brain patterns doing different kinds of thinking, communicating and weaving/making. It was fascinating to note the difference in the more experimental problem solving approach of making a new thing, alongside the making of the first parts of the Memory Bag, which is based on traditional well known forms and processes which I have completed many times. The whole data collection aspect was extremely interesting, and the patterns traced in real time were densely fibrous and connected to many other forms I have been drawn to previously.

Having Rob Cruickshank and Alex Van den Broek on staff here also to translate this data into tones and then sounds has been another level of fabulous interaction. The work of the NZBRI is very serious and important as they are searching for an understanding of brain health. The area where mind and brain overlap is what interests me most in this particular work, as the inner worlds of memory, imagination and response must be hidden deep within these patterns of energy transfer and connection. How can the vivid complexity of an individual existence be contained as well as developed, within a brain? Which can be measured and recorded and observed like this? It’s another very interesting intersection of science and art that I hope to explore further in future.

To quietly be in the Labyrinth and to hear the Brain Music is a way of being deep inside another brain.

The final collaborations were with a musician, composer, dancers and photographers/film makers.

Three groups of dancers were invited to explore the temporary Labyrinth installed in the performance space. A group of high school students from Papanui High School under the guidance of Kendra Takle came for a couple of afternoons and created forms which they filmed. Zen Zen Zo leader Alys Hill and her group of physical theatre dancers came twice also and created a response which they then presented for an evening.

Well known choreographer and dancer Fleur de Thier spent many hours over two days with Aleisha Seaward and Mariafelix Fuenzalida her two dancers, responding to the spaces and shapes of the work. They developed ideas in open rehearsals, which was then performed to an audience on the Sunday afternoon. Cathy Irons, a talented and passionate musician, performed the premiere of John Emeleus's Sonatina while dancers interacted with the music of her violin, her presence, and the spaces and objects I had made. This was a very moving and abstract work. The footage we gathered from this is being edited for another piece of film for the Labyrinth in the Library if it can be completed under these lock down conditions.

So the spark of our imaginations was ignited, linking across all these different disciplines, involving all these people, exploring their creativity and their thinking through their own work. From our brains, to yours.