During 2020 ~ year-of-turmoil ~ the crucial role of health systems and those that work within them have come to the fore in the minds of many. I took my seat in the TSB Space at Tūranga for the WORD Christchurch event ‘Medical Misadventures’ along with many other interested festival-goers, eager to encounter the thoughts of two authors who have explored, in their latest novels, the consequences of failures and mistakes within the health system.

In a discussion facilitated by writer, medical student and podcast host Emma Espiner, novelists Carl Shuker and Eileen Merriman sat down to talk about issues that inform their latest works, each of which have as their genesis medical mishaps – in Shuker’s acclaimed novel, a surgeon deals with the aftermath of an operation that goes devastatingly awry, while Merriman’s novel centres around the pressures experienced by a junior doctor and an Anaesthetic Fellow, investigating addiction within the medical profession.

There was a fair amount of discussion of systemic issues within medicine, and the impacts of these both on medical professionals and patients seeking care. Merriman spoke of her wish for her novel to provide a window into the world in which she works – she is a full-time consultant haematologist at North Shore Hospital. She acknowledged the ambiguities and difficulties patients have in navigating healthcare, and Shuker likewise emphasised the importance of transparency in the system.

Merriman’s novel The Silence of Snow illuminates experiences of addiction amongst health professionals, and draws attention to the dissonance of those who give care being unable to extend that care to their own health when faced with the pressures of a high-powered job. She described folks who become junior doctors and medical professionals as generally being highly driven people who have often sacrificed parts of their lives in pursuing their professional careers. The consistent pressures of working punishingly long hours within a health system that is at capacity and chronically underfunded, alongside minimisation of the medical professionals’ own needs, culminate, both in the novel and in her anecdotal research, with risky self-medicating of stress.

Shuker’s novel A Mistake has as its protagonist Elizabeth Taylor, a driven and uncompromising woman who finds herself dealing with the aftermath of a surgery gone wrong. Her experiences also draw attention to the particular challenges women face in navigating what is still largely a male-dominated profession. Shuker based the catalyst event of his novel on two separate cases that came before the Health and Disability Commission, and he, like Merriman, has intimate knowledge of the structures and hierarchies of the medical profession through his work as former editor at the 'British Medical Journal'. 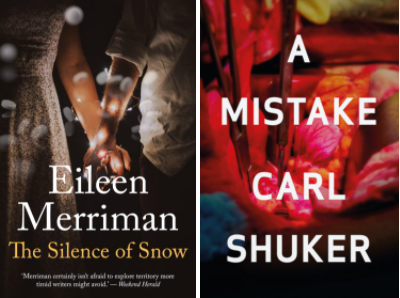 The discussion broadly emphasised the vulnerability of medical professionals in an under-resourced and over-burdened health system, the need for transparency in approaching surgery and those who perform it, and the complexity of measuring risks, outcomes and performance. On the weight and legacy of medical mistakes, Merriman remarked on how, as a medical professional, one’s practice is shaped by the instances in which something goes wrong, or something unexpected occurs – and that change is implemented as a result of reflecting on mistakes.

Both of these novels are timely and fascinating in their explorations of a profession and system often mysterious and inaccessible to those who aren’t insiders, and will reward readers interested in issues of addiction, aftermath, systemic complexities and change.

The Silence of Snow