"Guess what Jordan had for news today?" Libby asked her Mum when she came home from school.

"His Dad’s partner’s coming to live with them in their house. They're going to have a big party to tell everyone."

Libby dumped her bag on the sofa. "Jordon’s getting a new pair of cargo pants to wear to the party," she said.

"I wish I could have a pair of cargo pants," said Libby. 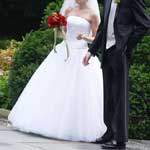 The next day, at lunchtime, Hester Wilkes told everyone that her mum and dad were getting married in the holidays. "I’m going to be the bridesmaid," she said. "I’m getting a long dress. I'll be going to the hairdresser’s to get my hair blow-waved."

"Lucky her," said Mum, when Libby told her. Mum cut an apple into pieces and put the pieces on a plate for Libby and her little brother, Thomas.

"Can I get my hair blow-waved?" asked Libby.

"Some time," said Mum. "When something special is happening."

"When Hine’s mum and step-father got married Hine got new bike pants to wear to the wedding," said Libby. "Why don’t you and Dad get married?"

"We already are," laughed Mum.

"It’s not fair," moaned Libby. "Nothing special will ever happen round here."

But on Friday afternoon, when Libby got home from school, Mum and Dad were standing on the drive outside the garage. The car was packed with holiday things and Thomas was in the back seat.

"Here," said Mum. "This is for you." She gave Libby a big plastic bag. Inside was a new purple sleeping bag.

That night, after Libby had helped cook toast and baked beans for tea, she and Thomas lay in the tent in their new sleeping bags. Outside, Mum and Dad were sitting beside the camp fire with their arms around each other.

Libby shut her eyes and pretended that Mum and Dad had just got married and that Thomas was going to be her new brother.

"I’m pleased they took us with them on their honey-moon," she giggled - but Thomas was already asleep.

Read our interview with Diana Noonan, opens a new window.