Thai green curry at the moment, plus I really love those little cake things with a bit of fruit in the middle of them - they’re called friands and I’m a sucker for them.

Fi… actually Fifi was my nickname years ago - I was christened Fiona but only my father ever calls me that.

Oh - there have been so many… and all of them involve me gossiping and being caught out. I try not to gossip now.

A glass of wine, the movies, the company of friends… but most of all I like to soak in a bath with a good book.

Valerie Singleton of a programme called Blue Peter in England - she was gorgeous, talented and seemed like a really nice person. I met her last year in England at a fundraiser and my planned speech to her about how she inspired me came out as ‘Hi, oh wow’. I was completely unable to say anything useful or acknowledge her input into my creative life, so awed was I by her proximity.

When I was little, shy and uncertain - I always thought no-one wanted to be my friend. I took refuge in art and then people started to notice that I could draw really great pictures. That gave me some friends and a few enemies too. When I was a high school I was terrible. I wore my uniform badly, wagged P. E., got caught doing things that had me in a few detentions. By the sixth form I realised that if I didn’t pull finger (get a move on - Ed.) I wasn’t going to pass anything and I’d be stuck repeating years forever. So I made an effort and got through - just. 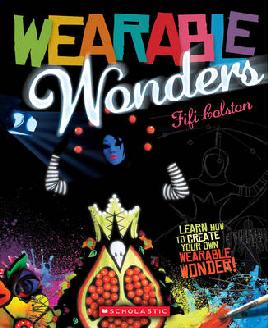 Favourite was definitely Art - though I didn’t get to do nearly as much as I wanted to. I enjoyed English in parts; the parts that weren’t trying to find meaning in what I thought were meaningless poems. I did Latin for two years and whilst I didn’t like conjugating verbs, I really loved the mythology and social history of the Romans. I did fabulous illustrations in my exercise books of gods and nymphs.

Hated? Oh that’s easy - Maths. I couldn’t understand it; it all seemed like a foreign language to me. I got 33% for it in my 5th form year. It was a disaster.

My first loved book was called The Silver Thimble Story Book. Simple fairytales like The Snow Queen and Thumbelina. The illustrations were beautiful and I copied them again and again. I rewrote the stories in my own words too. It was the first book I remember being able to read without any help. I was 5. I still have it on my bookshelf and I still love it.

Artemisia Gentileschi. She was a 15th century artist of huge talent in a world dominated by men. She did really bold, kick butt paintings and her drawing and painting skills were extraordinary. Artemisia had a colourful life - I think she would have been quite a woman to know.

Can there be one favourite? For adult’s stuff I can’t go past Ben Elton for humour. I think he’s very astute and his comic observation is brilliant. But I like different authors for different times of the day/year/ mood I’m in. As far as children’s authors go… well I don’t think I read enough kid’s fiction to make fair comment; I plan to read more and broaden my taste. I did read the Confessions of Georgia Nicolson series by Louise Rennison though. They were hilarious and we all had a good giggle over them in our family.

Because I was bored with being an artist. That’s probably the truth actually. As an illustrator I get to draw lovely pictures for a lot of writers. And some of the writing I find a bit of a yawn. I started writing Verity’s Truth as entertainment for my daughter and just to see if I could put words down on paper in the same way as I put paint on it. I found that yes, I can create images and emotion, time and space with letters of the alphabet. It’s just painting with a different medium that’s all.

I type stuff into my computer in my study at home. But I do a lot of my planning and thinking and plotting at cafés - the best one for this at the moment for me is The Chocolate Fish Café; in Scorching Bay. It’s because it’s by the sea - water always makes me think better and clearer. That and the great coffee.

Given that I’m still quite new to this art I might have a different perspective than say, Joy Cowley. But so far the best thing is… getting something published - it’s so exciting to see your words in print somewhere and know it’s going to be read by a lot of people. Having a book launch is quite a bit of fun too. I also like the way the characters at a point in your story start to come alive and tell you what they would do and how they would act. It’s spooky - like living with new flatmates who are only visible to you. They start to reveal things you hadn’t even thought of before.

The worst thing is waiting for the publishers to make up their minds about whether or not they want to publish it. It is excruciating and I’m such an impatient person. The other bad thing is the money. It’s terrible - unless you are J. K. Rowling.

Well I keep my illustration arm flexed and fit, so I’ll always be an artist of some sort. I sometimes have fantasies that I’m an important corporate woman earning huge money and driving around in a BMW and flown to London for meetings. But I hate wearing high heels and suits, and I’m very inattentive in meetings, so I guess that’s not going to be a reality.

Don’t write to try and become famous. Write because it makes you happy, entertained and proud to have done it. If you become famous as a consequence, that’s well and good. If you set out to write the ultimate winning piece, then you’ll be very disappointed when it isn’t noticed and you’ll make that mean things about you that just aren’t true.