I'm sitting by myself on the bench outside our classroom. I'm listening to the kids shouting and laughing on the netball courts. And I'm doodling idly with a purple felt pen, adding to the writing and drawings on my bag.

A ball bounces at my feet. Sonia Bayley rushes up and grabs it. She stands there and stares down at what I've just written. 'Beth loves Sam,' she reads aloud. 'Hey, Aria! Terri! Come over here! Come and look at this!'

They all crowd around me. 'Beth's got a boyfriend,' says Sonia, pointing at my bag.

'Woo-hoo! Beth loves Sam!' says Terri. 'Is it Sam West?' She puts on a deep voice. 'Sam West is the best.' The others laugh. Sam West is tall and blond and most of the girls think he's a real babe. But I think he's a geek. I don't know what to say to Sonia, Terri and Aria. I always feel shy around them. They're the three noisiest, most popular girls in my class - always making jokes and teasing and talking when they shouldn't be and getting into trouble. And they're right into boys. They never usually notice me, probably because I'm so quiet.

'Who is it then?' Sonia jeers. 'Sam Barrington?'

Everyone laughs and even I smile. Sam Barrington is a Year 2 kid, kind of cute-looking, but a real little brat.

'Come on Beth Mason, tell us about your boyfriend.' Sonia bends over me. She puts her face close to mine. 'Tell!'

I want to say, 'Get lost. It's none of your beeswax.' But I hear myself saying in a pathetic whisper, 'He's not my boyfriend. He's just a …'

'What did she say?' interrupts Aria. 'Just a friend?'

'If he's a boy and he's a friend, that makes him a boyfriend!' says Terri.

'Imagine Beth Mason with a boyfriend,' Aria giggles. 'She never ever talks. What would they say to one another?'

'What colour eyes has he got? What colour hair?' Sonia wants to know.

'Oooh!' squeals Aria. 'I love brown eyes. Does he go to your old school?'

I shake my head.

I shrug. 'Lots of places. The beach. He likes the beach.'

'Do you kiss?' demands Sonia.

'Brent and I do,' declares Sonia. 'He's not a real boyfriend if you don't kiss.'

I can hardly believe it! Sonia Bradley is jealous! She probably wants to be the only one in our class with a boyfriend.'

They're all quiet now, waiting for my reply. I think about Sam and me walking on the beach together. I think about us sitting on the couch watching TV. I smile. 'Yes. Sometimes. When Mum's not looking. Sam's just so gorgeous I can't help it.'

'She can't help it!' Aria squeals.

And Terri says, 'He must be a real babe, this Sam.'

'What does he say when he kisses you, Beth?'

This is too much. I've had enough. 'He doesn't say anything. I keep trying to tell you but you won't listen. Sam's a German …'

'A German! Cool!' says Aria, butting in again. 'No wonder he doesn't say anything! Can he speak any English at all?'

The bell buzzes suddenly on the wall behind me. I snatch up my bag and hurry into the classroom. I keep my head down for the rest of the day. But I can't help hearing whispers as the news speeds around the classroom. 'Beth Mason's got a German boyfriend.' I can feel kids looking at me. And I can feel Sonia Bayley giving me the evils all afternoon.

When the bell goes for home time I'm out of the door like a shot. I'm not going to hang about for any more of that boyfriend stuff. As I run down Bayview Road past the shops, I think about Sam. He's my best friend, my only friend at the moment, because I have no friends at school yet. Mum says it can be hard to make friends when you start at a new school. Give it time, she says.

I'm running out of breath. I slow down as I approach Rosebank Street. I hear bike tyres on the road behind me. 'Hey Beth!' It's a boy from our class, Adam somebody - freckled face, blue eyes and braces on his teeth. What does he want?

He jumps his bike over the gutter and stops in front of me. 'You took off so fast you didn't get your notice.' He hands it to me. 'It's about the trip next Wednesday. Are you going?'

He pushes his bike and walks beside me, talking about the homework we have to do for tomorrow. I tell him the homework Mrs Brizzell gives us is nothing compared to what I used to get at my old school. But we're both in agreement about one thing - homework should be banned.

We reach my gate and Mum's there, talking to a neighbour over the fence. Mum smiles at Adam. 'Hello.' Then, 'How was school, Beth?' she says to me. Before I can reply, she says. 'Sam's waiting for you on the back veranda. I think he's expecting to go to the beach again.'

I see a funny look pass over Adam's face. He starts to get on his bike. 'Wait a minute, Adam,' I say quickly. 'I'd like you to meet Sam.'

Sam has already heard my voice. He comes tearing around the side of the house. His eyes shine with happiness as he rushes up to me. 'No, Sam!' I laugh, as I fend him off. He licks my neck and nibbles my hair excitedly. 'Back off, Sam.!'

Adam stands with his mouth open. 'This is Sam?' 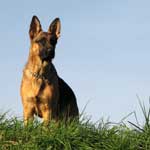 Adam looks impressed. 'He really loves you, eh? German Shepherds are so cool. Can I come to the beach with you and Sam?'

Read our interview with Jane Buxton, opens a new window.