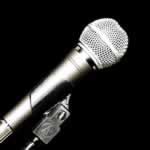 She didn’t see it coming.

Actually, she did see the microphone coming, but not realising what was about to happen, she didn’t duck in time.

Cassie had almost finished her item, the theme song from ‘Titanic’. Her mother had tried to suggest it wasn’t the best song to pick. Maybe her Mum had known something?

She started her routine, standing confidently in front of the microphone. During the crescendo, her voice soaring as high and loud as she could manage, she reached out to take the microphone from the stand. It wouldn’t budge, so she yanked at it. The stand wobbled. She pulled harder. It released with such force that it struck directly on the bridge of her nose and across her forehead. She was on her way down to the stage floor before her brain connected with what happened. By that time, it was too late. She was out cold.

She hadn’t wanted to go to school the next day. And she refused to think about singing in the finals even though she had been selected. Her father laughed and told her, “It’s like falling off a bike. You have to get back on straightaway.” Her mother was a little (but not much) more sympathetic and realistic. “Well, dear, a few people will be amused by your… accident but they’ll forget about it soon enough. Now sweetie. You keep your head high and show them that you aren’t going to let this get you down.” Her little brother had burst out laughing at that. “No, don’t let them get you down. You can manage that all on your own.”

Chloe and Briar hovered around her at interval, laughing at her. Chloe gave a graphic description to the small crowd gathered, of the whole mortifying scene. First, Cassie’s head had jerked back, then her knees crumpled. She slid to the floor, slowly, and not very gracefully. When she hit, she slumped backwards, but her legs shot out from under her (just as well she was wearing jeans, otherwise they would have something else to laugh about). She lay prone, the backup music still playing.

Briar giggled. “At first no one moved. Everyone thought it was part of the act. You know, the dying bit from Titanic.” Then, contestants and back stage crew who had been standing in the wings snickered and took a step or two forward to get a better look. Not too close, just in case whatever had happened to Cassie was infectious. Mr Anderson, the talent quest coordinator pushed his way through the now standing audience, jumped onto the stage and ordered the curtains closed.

“It could only have taken a few minutes, if that,” said Chloe, sounding disappointed.

“We wondered if you were trying to be the sinking of the Titanic”, Briar sniggered and it took a minute of two for her so-called friends to stop laughing.

“Then what?” Asked Cassie, hoping to sound unruffled.

“Don’t you know?” smirked Briar. “Oooh, we could tell you anything.”

“I remember trying to pull the microphone from the stand. I remember it came out, quicker than I expected. The next thing Mr Anderson’s big hairy face was right up close to mine.”

“Yeah, no wonder you threw up,” laughed Briar.

“It is soooo embarrassing,” said Cassie to her friend, Tylah, as they walked home. “I’ll never live it down.Best performance by a falling would-be star. That’s the award Chloe reckoned I should get. I’m not going to enter another talent quest ever.”

“Cassie, ” said Tylah patiently. “You’re in the finals. Your singing is great. So there was a bit of an accident. So what? It won’t happen again.”

“Too right it won’t, because I won’t ever do it again.”

“What was it your dad said? Get back on the bike?”

Cassie, close to tears of embarrassment, muttered. “Yeah, whatever. Easy for him. He isn’t the one everyone is laughing at.”

Cassie and Tylah stood in the wings. The school hall was full, and this time, there were students andteachers and parents.

The hip-hop group were hip-hopping around the stage, completing their second encore.

“I can’t do this, Tylah. What if something goes wrong?”

The members of the group came running and twirling and laughing off the stage, slapping each other on the back and giving the high fives.

The MC stepped out from behind the closing curtain and Cassie heard the audience quieten. “The next item is Cassie Smythe. Fortunately,” the MC paused, “Cassie has picked herself up” and he waited for the laughter to die down, “and is able to perform in the finals tonight. Give a warm hand for Cassie.”

Cassie heard the giggles and calls from the audience.

“Maybe she needs a helping hand?”

“Make sure you lot in the front row watch out.”

“Is there a doctor in the house, just in case?”

The MC had to hold up his hand to quieten the laughter.

Tylah pushed Cassie gently onto the stage. “Remember, smile. Show them you’re not bothered by it. Look like you’re enjoying yourself.”

Cassie scowled at her friend.

The curtain folded back.

The stage was dark and Cassie moved slowly to centre stage and stood, her back to the audience.

She turned, slowly. The single spotlight flared and picked out the very large paper mache microphone firmly grasped in both hands. She heard laughter. But were they laughing at her, or had they got the joke?

The music started. Most acts performed the same item they had done for the heats. Those who had seen her humiliation a few days earlier were expecting the tune of the ‘Titanic’.

Slowly, recognition of the introductory bars of music. Cassie took a deep breath and opened her mouth to sing. Her voice trembled at the sound of laughter coming from the audience. Embarrassment and humiliation swept over her. It had been a silly idea of her Dad’s. She should never have let him talk her into it. No one would let her live this down and trying to show that she could see the funny side didn’t seem to be working.

She hung her head and turned to leave the stage. Someone turned off the background music.

She heard clapping. The audience was laughing, but they were laughing with her.

Some stood. Then others, until everyone in the hall was standing and clapping and laughing.

Her Dad had been right after all. What had he said before she left home? “Laugh, and the world laughs with you.”

Tylah nodded and smiled from the wings, waving her hand to usher her back to centre stage.

Cassie hesitated only a second. She stood centre stage and took a deep bow.

The music started again. Although nervous, she started the routine she and Tylah and her Dad had rehearsed. Hamming it up, with the very large toy microphone up, she began singing to the music of “I did it My Way.” When she got to the line, ‘Regrets, I’ve had a few’ she mimed hitting her head.

The audience’s laughter drowned out her next words.

She got a standing ovation.

Read our interview with Jeannie McLean, opens a new window.