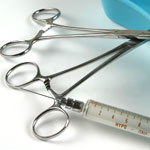 I came home from school one day with news to tell Dad about my friend Brian. But Dad called out to me from the kitchen as soon as I opened the back door.

There was a new shelf up on the wall over the bench. Dad’s tools were on top of all the stuff we usually keep there.

DAD: 'It’s for all those recipe books people keep giving us. I'll give it a lick of paint tomorrow. Good idea, Greg? … Greg? Anything wrong, Greg?'

GREG: (that’s me): 'No. It’s a neat shelf. But, Dad, Brian wasn’t at school. His Mum rang. There was a car accident and Brian’s broken his leg.'

DAD: 'Poor old Brian. We could send him a Get Well card.'

GREG: 'What I wondered, I mean what exactly happens when you break a leg?'

DAD: 'They take you to hospital in an ambulance and put your leg in plaster to keep it straight while it mends itself.'

GREG: 'How do you get an ambulance to come?'

DAD: 'Look, we'll clear up this mess and get tea first. Then I'll tell you all about it. I've just thought of a good game.'

After tea there were a few things to do, but at last there was time for the game before I went to bed.

DAD: 'We're going to play a pretend accident. Where’s that truck of yours? And fetch Pinny. He can join in and pretend break his leg.'

Pinny’s my friendly sort of toy rabbit. Long ago he used to belong to Dad, but Dad gave him to me, so now he’s mine.

I fetched my truck and I fetched Pinny. He likes playing pretend games.

Dad put Pinny in the driving seat and whizzed the truck round the room, very dangerously. Suddenly - CRASH! The truck tipped and Pinny fell out.

GREG: 'Poor old Pinny.' I wanted to pick him up.

DAD: 'Don’t move him. I think he’s broken his leg. There, I'll put your jacket over him to keep him warm. you’d better ring for an ambulance, Greg.'

Pinny’s ears looked small and sad, sticking out from under my jacket. I ran to fetch my toy cell phone.

DAD: 'Dial 111. Tell them we need an ambulance. Give your name and say exactly where the accident’s happened.'

DAD: 'Well done, Greg. Now you sit with Pinny and try to cheer him up. I'll be the ambulance man.'

Dad ran round the room driving a cushion for an ambulance and making oo-aa, oo-aa ambulance noises. He stopped when he got to Pinny.

He pulled back the jacket and had a long, serious look at Pinny. He touched his leg very gently. I truly thought I heard a tiny 'Ouch!' Then Dad went and fetched his sewing kit.

DAD: 'We'll have to take you to hospital. I'll just give you an injection to stop it hurting.'

Dad took a needle from his sewing kit. I felt sorry for old Pinny.

DAD: 'An injection can hurt a little, but moving a broken leg can hurt a lot. So please hold his paw and help him to be brave.'

I held Pinny’s paw and Dad pretended to give the injection. We waited long enough for the injection to work, and told Pinny jokes to cheer him up. Then we lifted him gently on to a book, for a stretcher, and put him in the cushion ambulance, and oo-aa, oo-aa'ed him off to hospital.

While I was having my shower, Dad told me about X-rays and how a broken bone is set. He told me about plaster bandages and crutches.

DAD: 'I'll make Pinny some crutches for tomorrow. He'll be proud of those. I expect Brian'll be proud of his crutches, too, when he comes out of hospital.

Now here is the amazing part of this story. The VERY NEXT DAY, I was just back from school. Dad was painting the new shelf in the kitchen, and I heard CRASH! CLATTER!! YEOW!!!

I ran to the kitchen, with Pinny in my hand. There was a smashed-up chair, and Dad was on the floor!

GREG: 'I know exactly what to do! Don’t worry, Dad. I'll just put my jacket over you to keep you warm.'

Then I went to the telephone in the lounge and dialled 111 and told the person who answered that we needed an ambulance. I said I was Greg, and my Dad had broken his leg at 23 Grove Road, in the kitchen. They asked me a few questions and then they said they'd send someone at once. 'Tell your Dad we're on our way,' they said. 'That'll cheer him up.'

But I'd already thought of a much better joke that'd make Dad laugh a lot.

I fetched Dad’s sewing kit and zoomed back to the kitchen driving a cushion for an ambulance, and making oo-aa, oo-aa ambulance noises.

I pulled back the jacket and Dad said 'NO!' before I'd even touched him, so I didn't.

GREG: 'We'll have to take you to hospital. I'll just give you an injection to stop it
hurting.'

I took a large needle out of the sewing kit.

GREG: 'Pinny, you hold his hand and help him to be brave.'

Poor old Dad, he didn’t laugh. He seemed really scared of that needle. So I put it away and began to explain I was only trying to cheer him up. Just then we heard a real oo-aa, oo-aa ambulance noise and the ambulance man stopped at our gate.

I opened the door for the real ambulance man. Mrs Wilson came from next door to see what was up. She was very kind and held Dad’s hand while he was given an injection. And she held mine too, when they lifted Dad onto a stretcher and put him in the ambulance.

Pinny and I went to stay with Mrs Wilson while Dad was in hospital.

Soon my friend Brian was back at school, proudly showing off his crutches.

Dad wasn’t proud of his crutches.

He said he was proud of ME!