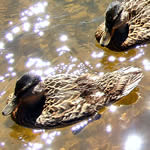 The first blast of sound bounced off the mountains. Sound that meant excitement, action, drama even. I slid down from the top bunk and jammed my feet into my sneakers. No need to get dressed - I'd worn shorts and T-shirt to bed.

On the verandah, Joe thumped his tail. I let him off and he pushed past me into the kitchen, looking for food. The primus stove was already roaring, and Dad was cooking breakfast.

Another blast rattled the windows. I started to scoff the heaped plate of bacon, tomato and eggs Dad gave me, and had almost finished before my two sisters turned up.

"I've got better things to do," said Rachel, my older sister, fluffing her hair with her fingers. She meant boys. All she'd done this summer was hang around boys.

My younger sister Anna said nothing. She gave me the inscrutable stare she had been practising in front of the mirror.

I ignored her. "What about you, Dad? you’re coming, aren’t you?"

"I’m taking my togs round the other side, as far away as I can get," said Mum.

What a bunch of no-hopers! Well, who cared if they missed all the fun? I shrugged. "I’m off then."

Grabbing my sun hat, I ran down the verandah steps. With any luck no-one would remember it was my turn to do the dishes.

Down the last steep bit of track and out of the bush. Meaty machines on trailers were parked all along the lake shore. Men in orange overalls with oily hands stooped over the engines - twin outboards, sleek inboard jet units, and best of all, the massive motors of the hydroplanes.

Spitfire 3 was there, the most powerful hydroplane in New Zealand. Its owner looked up. "Hi there!" he said. "The doctor with you?"

"He'll be down later," I said, chuffed he'd recognised me. "He’s on duty this afternoon."

I hung around, but he didn’t ask me to pass him a spanner or anything. Some big boys came over, spouting all sorts of technical stuff. Show-offs. They took no notice of me. After a while, I went away. Spitfire 3’s owner didn’t see me go.

Graham was up on the judge’s platform, testing the loudspeakers. I waved, but he didn’t see me either. The microphone was squealing. Just as the squeal stopped he swore violently. The swear words echoed round the lake. The boat drivers all laughed, and I laughed too.

Spectators started to arrive. Stall-holders set up on the paddock behind the lake shore began shouting for custom. Tinny music from the merry-go-round mingled with the increasing babble of voices. The day began to hum.

Boats for the first race jockeyed for position on the start line. The loudspeakers crackled as Graham began the countdown. Everyone turned to watch. But the boats slowed, throttles cut back to idle. I pushed through the crowd to see what was going on.

A small black dot moved purposefully up the lake. My heart thumped. It couldn’t be. I'd tied him up - hadn’t I?

Over the loudspeaker, Graham said, "Would the owner of that dog kindly remove it so that we can start the race."

He knew only too well whose dog it was. I no longer wanted to be recognised. Sitting down in a group of strangers, I wrapped my arms round my knees and pulled my hat down over my nose. I peered cautiously out from under its rim. Out on the lake, Joe was still swimming.

The crowd grew restless. A long way up the lake, the officials' launch turned Joe round. People clapped. It must have been hours before he came ashore, to cheers and jeers.

I made myself as small as I could. It was no use. With the unfailing instinct of the trained gun dog, he made straight for me. He shook water all over me, then knocked my hat off to lick my face, just in case anybody had missed the reunion.

Scarlet-faced, I hauled him through the crowd by the scruff of his neck.

"Way to go, girlie!" said one of the boat drivers as we scurried past.

I looked straight ahead, blinking back angry tears. Behind us the first race had started. I was missing it. At the bottom of the track up to the bach, I stopped and looked at Joe. He looked back at me, his tail between his legs.

He went. After a few minutes he hadn’t returned, so I thought it was safe to go back to the lake shore. I chose another group of strangers to sit by.

The second and third races came and went without mishap. The big one was next, straight after lunch. I joined the queue for the hotdog stand, then wandered round the stalls. I saw Anna betting on the chocolate wheel. She always had money.

The warning hooter went. People drifted back towards the lake shore. I saw Dad disappear into the First Aid tent, with his medical bag. Usually I would go and join him, but someone might have told him about Joe.

The hydroplanes started to roar and the loudspeaker crackled. I turned to follow the crowd, looking forward to watching the big race.

A creature out of a Spielberg film was coming across the paddock towards me. Great fans spread out on each side of its face. I stopped dead. It came closer. Straight through the last stragglers it came, making a beeline for me.

Panic gripped me. It was Joe. In his mouth a large duck, its wings fanned out on either side of his head. I had to stop him. I ran.

Head high, stepping proudly over the grass, on he came. The gap closed at last. I stood between Joe, the duck, and the crowd.

He dropped the duck at my feet. He wagged his tail, expecting praise and pats. I ignored him and crouched to check the duck. It was alive - it didn’t even seem to be hurt.

Carefully I picked it up and tucked the trailing wings in against its sides. Clutching the duck to my chest and keeping my back to the crowd, I strolled towards the only piece of cover for miles.

"Don’t die, duck," I prayed as I pushed it gently under the overhang of a flax bush. "Don’t die on me."

We went home the long way by the road. His nose to my heel, Joe followed me soberly. Back at the bach I tied him up. He looked at me. I looked at him. What if someone reported him to the Department of Conservation? Perhaps the rangers were out looking for him this very moment.

I could hear the hydroplanes battling it out, Spitfire 3 amongst them. Then a different sound cut across the scream of the engines. A muffled boom. An explosion? I tore down the track.

The engines cut, one by one. Steam hissed. Voices shouted. I couldn’t see clearly through the trees. I could hear the loudspeaker, but I was too far away to pick out the words.

By the time I got to the beach, the excitement was over. An oil slick stirred on the surface of the lake. The hydroplanes were coming in. All except one. I saw Dad go into the First Aid tent, followed by two officials supporting a figure in wet orange overalls. The first real accident in years, and I had missed it.

A ragged cheer, and the racing started again, the last race of the day. There seemed little point in staying. Kicking at stones, I made my way towards the track home.

By the hotdog stand Rachel was laughing with the big boys I'd seen that morning. Anna was just coming across the paddock. She was carrying the biggest box of chocolates I'd ever seen.

I just kept on walking.

Read our interview with Joanna Orwin, opens a new window.