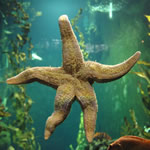 The name’s Barb. Tiger Barb. I’m the toughest, smartest, best-looking fish in the tank. My scales are as shiny as silver coins. My black stripes are fierce. My fins are red, so you’d better watch out. Red means danger!

I’m the boss of the tiger barbs. When the other barbs get in my way I nip their fins — snap, snap! All the fish in the tank know I’m in charge. Boy, you should see the fat little guppies wriggling through the water when they spot me coming. As for those dopey clownfish — what a useless bunch. Beats me why anyone wanted to make a movie about a wimpy little clownfish. A tiger barb would have made a much better film star. Snap, snap, mind your fins!

My girlfriend’s called Dolly Barb (Geddit? Geddit?). Dolly is the biggest, curviest barb in the tank. Yeah, that’s right, she’s bigger than me. I’m the brightest and she’s the biggest. Together we’re the best.

Hey, all you movie producers out there, have I got a story for you! Pull up a chair and open your ears. Ready to roll?

It was just another ordinary day in the tank. Swimming laps to keep in shape, sorting out the airheads trying to grab the food flakes, blowing a few friendly bubbles with Dolly. We had no idea our whole world was about to go down the gurgler.

As far as aquariums go, that particular one was the best. It was huge, a couple of hundred litres at least, sitting on a big metal stand. There was a thick layer of pebbles on the glass bottom, along with several smooth stones. The stone right in the middle of the tank was a real beauty — big and solid, with some excellent hidey-holes in it.

Trouble was, the stone turned out to be too big and heavy for the tank. On the fatal afternoon everyone was watching cricket on TV. Fish, humans, even the fat slob of a cat was curled up on the sofa watching through slit eyes. Suddenly disaster struck. You guessed it — the big stone fell through the bottom of our tank. There was a creak, then a crack, then a crash, and — whoosh! Everything in the tank fell through the hole — fish, stones, gravel, plants, plastic mermaids, the lot.

“Glub!” screamed Dolly as we tumbled down the waterfall. “Tiger! Help! Where are you?”

Splash! The tidal wave crashed on the floor. We skidded across the big rock, slithered over piles of gravel and broken glass, and finally managed to swim into clear water. Panic-stricken fish were flailing and gasping all round us. Humans were paddling round too, yelling and screaming. The cat was sprinting up the curtains as if ten dogs were after it.

I looked up through the water. “Ah … let’s see, I think we’re under the dining table right now. Watch out for chair legs. Whoops!” I did an excellent slalom turn as the current swept me towards a table leg.

“Help!” Dolly cried, tumbling and turning in my wake. “Tiger! Where are we going? I’m scared!”

But we were in trouble. Deep trouble, because the water wasn’t. Deep, I mean. And the current was still dragging us onwards. I looked up. We were being swept through the lounge door. Big wide world, here we come!

I didn’t answer her. I couldn’t breathe either. We lay, side by side on the sodden carpet, drowning in air. We opened our mouths and flapped our fins, but nothing helped.

I’m too young to die, I thought. I’m not ready to go to the great fishtank in the sky. Help, help! Somebody help us!

Then two huge figures loomed overhead. A pale moon of face descended. “Looks like these two barbs have had it,” said a booming human voice.

No, no, I tried to scream. We’re still alive! Just get us into some water! The face began to rise upwards again. Don’t leave us, I yelled silently.

With my last atom of strength I pushed my tail down and jumped off the carpet. If I’d been in the water it would have been an almighty leap, way up into the air, and I’d have come down with a massive splash. It would have been the leap to end all leaps. But here on the soggy floor, all I did was go…splat.

That was it. My last effort. Goodbye, cruel world. Sorry, Dolly. I know you were looking forward to having hundreds of babies.

But then a human hand came down and scooped us up. “Hey, one of them twitched. Let’s give them a chance,” said the enormous voice.

A moment later Dolly and I were tipped into a plastic bag. Water! At last! We could breathe again. We floated quietly, too exhausted to move. “My hero,” sighed Dolly. “If you hadn’t made that last magnificent leap, we’d have been flushed down the loo by now. you’re fantastic, Tiger!”

You can guess the rest. We were put into another aquarium, Dolly and me and the handful of fish who’d survived the torrent. A few days later a whole lot of new fish arrived. I had to go through several more sessions of showing them who’s boss of the tank. Snap, snap, watch your fins!

Mind you, I’m just a softie when it comes to my own children, all fifty-three of them. They tell me I’m a real pussycat now. I guess family life can do that to the best of us. Even the mighty Tiger Barb.

Yep, I got the girl as well as the new tank. How’s that for a fishy story?

Read our interview with Lorraine Orman, opens a new window.