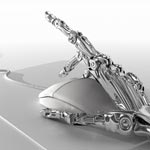 Sycrobyte, the space machine alien, longed to be out of the computer. He was tired of being fired at by missiles. It would be fun, he thought, to bounce on the small trampoline that stood near the computer table and eat crunchy potato crisps like his owner, Lisa, did.

"Why are you crying?" he heard someone ask.

When Sycrobyte wiped his eyes, he saw a beautiful microchip standing near.

"Your microchip Godmother. I will grant you two wishes."

Sycrobyte’s big eyes sparkled. "I wish to get out of here," he said.

"Before I grant your wish Sycrobyte you must promise to be waiting on the keyboard by the last stroke of midnight. If not, you will catch a horrible virus."

"I promise, Microchip Godmother," said Sycrobyte as she tapped his shoulder with her wand.

"OUCH!" He cried when he landed on his bottom on the floor of Lisa’s bedroom.

Climbing to his feet, Sycrobyte danced around the room singing:

Suddenly, Sycrobyte stopped his dancing when a loud 'Miaow" sounded nearby.
Sycrobyte looked round and saw a big ginger cat sitting on the mat by the doorway. The cat’s yellow eyes stared at him and it kept licking its mouth with its pink tongue.

Sycrobyte’s heart raced as he ran to the computer table and hid behind the wastepaper basket.

"Oh dear," he thought when he peeped from behind the basket and saw the cat cleaning its sharp claws. "That monster thinks it’s going to eat me for lunch! What shall I do?"

When the cat was looking the other way, Sycrobyte crept from behind the wastepaper basket and hid behind one of the table legs. Then, he crept to another leg and another until he reached the small trampoline.

As soon as the ginger cat saw Sycrobyte land, it quickly jumped up on to the bed too.

"Miaow," the cat called when Sycrobyte ran and hid beneath the pillow.

"What are you after Pussy?" Sycrobyte heard someone ask as he lay quietly there.

"Miaow," the ginger cat called again, clawing at the pillow.

"Help me," Sycrobyte wailed when Lisa pulled aside the pillow and he saw her standing there. "That monster will eat me."

"Why! It’s the alien from my computer game!" Lisa said with surprise. "How did you get here?"

Sycrobyte told Lisa about his wish and how he would rather be shot at by a thousand missiles than eaten by a giant ginger cat.

"Don’t be afraid," Lisa said as she picked Sycrobyte up from the bed and held him in her hand. "Pussy isn’t really that big. He only looks that way because you are so small!" Lisa shooed the ginger cat out of her bedroom and closed the door.

Sycrobyte was no longer afraid. It was good to be out of the computer and not have to dodge flying missiles all the time.

Then, Lisa shared a bag of potato crisps with him, and they were delicious.

Sycrobyte had just finished the last crisp when Lisa came back into the room, much later.

"Can I please have another bag of crisps, Lisa?" Sycrobyte asked when she opened the drawer and took him out. "I like potato crisps, they're really yummy." He smiled and licked his lips.

Lisa was amazed at how such a small alien could fit so many crisps into his tiny stomach.

"I'll give you another bagful after I’m in bed," she promised, placing Sycrobyte down on the pillow.

Later, Sycrobyte hid while Lisa’s Mum said goodnight and put out the light.

"You can come out now, Sycrobyte," Lisa said after her mother had left the room.

"Goody. Now I can have more crisps," Sycrobyte said as he came out from beneath the pillow.

"Not unless you promise to tell me how to outsmart the 'baddies' who keep firing missiles at you in my computer game." Lisa waved the bag of crisps temptingly out of Sycrobyte’s reach.

"I promise…I promise…" Sycrobyte said, his goggly green eyes fixed on the bag of crisps. "Well Lisa. When you see a missile trying to shoot me from the right hand side of the monitor screen you should press the number six button on the key-pad, O.K.?"

"That’s not right, Sycrobyte! It says in the instruction book just to press the space bar of the key-pad."

"That’s wrong Lisa! I should know, shouldn’t I? After all I’m the one being shot at, aren’t I?" Sycrobyte’s green eyes flashed with indignation. He took another crisp from the bag and bit hard on it.

They argued back and forth about how to play the computer game with Sycrobyte pausing every now and then to refill his mouth with another crisp.

On and on they talked until Sycrobyte was surprised to hear the hall clock striking midnight. Suddenly, he remembered his promise to Microchip Godmother. "Lisa! I've got to go!" Sycrobyte jumped from the pillow and ran across the bed as the clock was in the middle of chiming twelve dongs. "I'll catch a horrible virus if I’m not waiting on the keyboard by midnight! Goodbye!"

Sycrobyte jumped from the bed down to the floor and raced across to the leg of the computer table. But whenever he tried to get up on to the table, he kept slipping back down the painted table leg to the floor.

"Lisa! HELP ME! I'll catch a horrible virus!" he called.

But Lisa had not seen what was happening because the room was dark, and thinking that Sycrobyte was safely on the keyboard, she had gone to sleep.

"What shall I do?" the panic-stricken Sycrobyte thought when she didn’t answer his cry for help.

Then, he remembered the trampoline. Climbing on to it, he bounced and bounced, higher and higher.

On the last stroke of twelve, Sycrobyte bounced from the trampoline and landed on the computer keyboard.

"Whew! That was close," he gasped when he was zapped back inside the computer.

"And what is your second wish, Sycrobyte?" Microchip Godmother asked on his return.

"A bag of potato crisps everyday, forever, please!" Sycrobyte said with a smile.

Nowadays, Lisa’s friends are most puzzled as to why it is she always wins whenever they play the missiles and alien game on her computer. Puzzling too, are the unusual crunching and burping sounds Lisa’s computer keeps making all the time.

Read our interview with Marlene Bennetts.