When the sea was rumbling fiercely and fingers of misty spray clutched at the cliffs like the grey hands of a wild old woman, David heard voices calling through the sound of the breakers.

"The sea is talking to me again, Grandad," he said.

"The sea will always talk to those who will listen," said Grandad.

So David walked on the beach before breakfast and thought deep thoughts. He thought about Grandma, who had died last spring, about his mother and father whom he had never known and about the pet he would like to have owned.

"Just a little kitten?" he had pleaded with Grandad.

"Little kittens grow into big cats and eat a lot of meat. We can hardly afford to feed ourselves," said Grandad.

So David had collected tuatuas from the sand when the tide was low, scallops washed up after a storm and driftwood for the fire, but still there did not seem to be enough money to feed a cat.

The wild sea was retreating down the beach as David walked, leaving behind it a tangle of seaweed and shells…. and something blue…. and feathery….

But as he approached, a tiny struggle from the bundle of feathers startled him.

"It’s alive!" he shouted and ran towards it.

The head lifted slightly and the beak opened in what seemed like a vain attempt to cry out. The legs moved weakly, hopelessly entangled in the plastic mesh from a six pack of beer cans. David lifted the little warm bundle to his chest and cradled it. 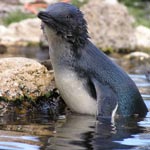 "If I could save it," he thought, "perhaps Grandad would let me keep it. It would be a better pet than a kitten."

He set off back up the beach. The bird lay limply in his arms. Once or twice he thought it had died but then it moved a little again.

"The bird man," thought David, "he will know how to save it."

The bird man lived on the hill behind the beach. A solitary man, he spent his life nursing injured birds back to health and setting them free. His back yard was set about with cages and pens, most of them empty, but one containing a seagull with a splint on its wing and another holding a rather sad looking tern.

David knocked on the back door. A grumpy looking man with thinning reddish hair and a droopy red moustache opened the door and looked at the bundle in David’s arms.

David silently held out the bird, who weakly stretched his neck and opened his beak. There was a softer look in the bird man’s eye as he took the limp bundle of feathers.

"It’s all right," he said, "I'll do my best for him. Half drowned I expect. Can’t get his legs free from that dreadful plastic stuff. You can come back tomorrow and see how he’s doing, but don’t be too upset if he doesn’t make it."

David walked slowly back home and told his Grandad. He did not ask to keep the penguin but went down to the rocks with his net after breakfast and caught some shrimps and sprats to feed it, just in case.

Mysterious voices were still sounding through the angry waves. David could not quite catch what they were saying but he listened for a time then shouted back.

"You did not look after him! You nearly drowned him. You have given him to me. I will care for him. You will not have him back!"

But the sea just growled and moaned in reply.

The next morning was Sunday. David hurried to the bird man’s house early. He took the sprats and shrimps with him. There was no sign of the penguin in the back yard. David’s heart sank.

In the warm kitchen a cardboard box lined with blankets held a little blue penguin, sitting up and taking notice.

A smile flooded over David’s face. "I brought him some sprats and shrimps," he said.

"Then see if he'll eat them," said the bird man.

David held out a little fish. Eagerly the penguin gulped it down.

"It’s always a good sign when they'll eat." The ginger moustache almost quivered into a smile. "But I'll have to keep him here for a few days. He’s got a nasty cut on his leg where the plastic was digging into it. When that’s healed we'll let him go."

"Sorry mate. It’s against the law. But even if it wasn't, it wouldn’t be right. He belongs to the sea - swimming, catching fish, waddling ashore with his mate to nest in the caves in the cliffs - that’s the life for a penguin."

David tried to pretend he was not disappointed but he did not go to the bird man’s house for the next three days. Each afternoon after school he walked along the beach and scanned the sea.

"I will not listen to you again," he shouted into the wind that whipped the tops off the breakers into little flurries of spray. "You can talk all you like but I won’t hear you." And he covered his ears with his hands.

On Thursday, he wandered casually to the bird man’s house in the early evening.

"Could do with a hand," said the moustache, gruffly offering David a bucket of fresh fish pieces.

David looked around. There was his penguin waddling about a pen waiting hopefully for his fish. David helped feed him and the seagull and the tern, which was looking much better. Then he watched as the bird man tried to coax two shags into eating.

"Come back tomorrow at sunset and we'll let the little chap go," he said. "I think he’s ready."

David heard himself saying, "Yeah, I'll be here. Would you like me to catch some more fish for the others?"

"Little live ones would be good," said the bird man. "They are more tempting for these reluctant eaters."

The next day, David took his net to the mouth of the river and caught shoals of little fish for the bird man to feed to the shags.

The sun went down in a fiery glow behind the hills leaving the earth still and cool. The bird man carried the penguin to the shore in a small wooden cage. David noticed a shiny metal band on its leg.

The sea was quiet tonight, whispering just a little, coaxing David to listen. He tried to ignore it as he helped the bird man undo the clasp that held the cage door. The little penguin had eyes only for the sea. With an eager step and a ruffle of feathers he waddled hastily to the lapping waves, splashed through, dived into deeper water and disappeared from view.

"Goodbye," said David, "I hope you will be all right."

The sea whispered back to him but he turned his back and wandered home. It was still whispering the next night when David watched the sun disappearing behind the hills.

"The sea will always talk to those who will listen," said Grandad. "Come on. Let’s follow where it is telling us to go."

"It will not get dark tonight," said Grandad and pointed to the golden disc of the moon, peeping lazily over the far edge of the sea.

"Why are we going here?" asked David anxiously, as Grandad led him up the path from the beach, over the cliffs, towards the little rocky bays beyond.

"Can’t you hear where the sea is calling?" answered Grandad.

David listened. "I can’t hear the voices any more," he said.

They climbed down a steep path to the shore of a little bay. Waves swooshed noisily around the point but the tide was out and had left the bay with a wide band of sand and stones.

"Let’s sit here for a while," panted Grandad as the stepped on to the beach.

Moving at the edge of the waves were three bobbing heads, which bounced out of the water. Carried on short legs and flapping their flipper-like wings for balance, three penguins ambled up the beach and disappeared into the cracks and caverns of the cliff face. As Grandad and David watched, more and more appeared - maybe twelve or twenty. David lost count as they scuttled up the shore. Moonlight glinted on a shiny metal band on one of the legs.

"That’s my one!" David whispered excitedly. "See, he’s got a band on his leg."

They walked home slowly and happily through the dusky shadows of the trees along the top of the cliff and past the golden path of moonlight across the water.

"I think I'll go every day to help the bird man feed his birds," said David thoughtfully. "It would be almost as good as having a pet of my own," he said.

"The sea is talking to me again, Grandad," said David listening.

"The sea will always talk to those who will listen," said Grandad.

Read our interview with Mary Carmine, opens a new window.