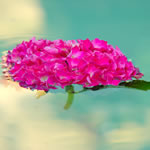 I suppose it all began ages ago when our new teacher, Miss Booth, decided the classroom needed sprucing up.

‘Look, everyone, how about you take turns to bring along a bunch of flowers? It would help make the classroom look colourful and I’m sure most of you could find something even if you didn’t search further than the verges alongside the road.’

So, that summer, Miss' desk was a happy, riotous mass of colour - deep blue agapanthus, and orange montbretia and yellow lantanas jostling together in a joyous shout of life. But later on, in July, we had to make do with bits of fern, nasturtiums and even dandelions; that is, until one morning, Piripi brought in a bunch of carnations.

Piripi - that’s the Maori version of Phillip - liked to think he was tough. Once, during a morning talk, Ramish said he believed in re-incarnation and after he'd explained what it meant, we all talked about the things we'd like to be if we had another chance and Piripi said if he couldn’t be a kick-boxing star, he'd be a lion.

There was a glasshouse full of carnations belonging to a shy, quiet man called Mr Green who lived by himself just down the road so we all guessed where Piripi’s contribution had come from and we all knew he wouldn't've paid for them.

I found out later that Miss Booth went to see Mr Green and offered to pay but he told her it was a good cause.

I reckon that’s what brought them together. It’s funny how things turn out.

Opposite the school is the house belonging to Mr Bodley, the school caretaker, who scares everyone even the principal. He caught Piripi amongst his roses about a week later, just before school.

I'd just arrived on my bike and saw everything. Piripi didn’t bother to answer or look. He just picked up the roses he'd cut, raced out of the garden, vaulted over the fence and tore across the road.

I'll never forget the screech of tyres, the thud and the sight of him lying in the ditch, roses strewn about him, his fingers slowly loosening on one single stem.

On a hill close to the marae there’s a small cemetery where Piripi’s buried. It’s enclosed by a wire fence to keep sheep out and people take it in turns to mow between the graves.

Our whole class went to the tangi at the marae and saw him lying in his coffin with his relatives sitting alongside and photographs on the wall behind. There weren’t many photographs. He was only ten.

A year later we stood with Mr Green and Miss Booth, or rather Mrs Green as she'd now become, for the unveiling of Piripi’s headstone. We sang hymns under a grey winter’s sky, feeling as bare and stark as the rose bush Mr Bodley had planted at the foot of the grave.

I dreamt of Piripi that night. And it wasn’t the nighmarish re-run of his death that usually haunted me when I went to bed.

‘Hey, Lindy,’ he'd said. And he punched me on the shoulder just like he used to, but gentler, lovingly. About his head was a great, stupendous golden glow, and he bubbled with a joyfulness and zest I'd never seen when he was alive. He held out his hand and I took it and it was warm and soft. Then he repeated those last words he'd uttered lying in the ditch outside the school.

‘Give Miss my rose, Lindy.’

Almost in a dream, I found myself on my bike cycling in cold gusts of wind towards the cemetery, not truly knowing if I was awake; ahead was a shimmering ball of light.

On the stark bush at the end of Piripi’s grave a single perfect red bloom seemed to gleam in the night.

I picked it up and it trembled in my hand.

Next morning at morning talk I told the class about my dream. At the end when I held out the rose to her, Miss seemed in a daze. ‘It must’ve sort of grown,’ I explained weakly.

‘I shouldn’t take it,’ she said shakily. ‘Mr Bodley put it there for Piripi.’

‘Well, Piripi wanted you to have it, Miss,’ I answered. We still called her Miss even though she'd been Mrs Green for almost a year. ‘He really seemed happy in my dream.’ I added quickly. ‘Roses stand for love, Miss, and he liked you everso much.’

Miss kissed the rose and I heard her murmur softly, ‘Thanks, Piripi.’ And then, because I was still standing close, I heard her whisper, ‘Welcome back.’

About nine months later Mrs Green had a baby daughter. They named her Phillipa.

‘I think Phillipa is Piripi re-incarnated,’ I said to Ramish, one interval a few days after we'd heard of the birth.

‘You usually try to improve yourself,’ he replied seriously. ‘I do not think he would come back as a girl.’

That’s when I beat him up and funnily enough, Miss didn’t seem to mind. It was his parents who kicked up the stink.

Read our interview with Mike Carter.