When my mother screamed I knew they were back again.

“Janice!” she yelled. “Get the spraygun!”

“Spray can, mother.” I wandered up the back steps into the house and took the can of insecticide off the shelf in the laundry.

My mother was backed into a corner of the kitchen. “There!” She pointed to the kitchen bench. I took a close look. Yep, there in the blue corner, looking wary and indecisive, was a very small ant. And emerging from the tiny hole where the benchtop met the wall were the waving front portions of one of its friends.

These are strong words for a woman who refuses to let my little brother watch Samuri Pizza Cats because of the violence.

“Want me to cover the food?” I pointed to the Sunday roast, all pink and raw and surrounded by peeled potatoes in its roasting dish. “The instructions say -” I tilted the can to read the writing.

“Just spray!” My mother bounded forward and whipped the roasting dish away.

I aimed the can and fired. The first ant took the full blast, rolled over and waved its legs feebly. The second ant reversed back down the hole.

“Awful, horrible things.” My mother plonked the roasting dish back on the bench.

“They’re only little ants.” I decided someone should stand up for them. “They were probably lost. Took a wrong turn on their way home or something.”

“They’ll be in the flour next,” she said darkly. “I suppose they’re breeding in the cellar again. Find the nest and get rid of them.”

“Then do it as soon as you get home.” She frowned at my jeans and shirt. “You’re not wearing those, are you? Where’s Laurence?”

“Yes I am, and down at the hutch,” I answered. “It’s Pet Sunday, remember? He’s brushing Snowflake.” Snowflake is my little brother’s pet rabbit. I don’t like him because he bites. (Snowflake I mean, not Laurence my brother although he once hit me with a hammer.) “Reverend Thomas told our group to wear casual clothes. We have to bring the animals in for the Pet Blessing.” I put the spray can back on the shelf and yelled from the laundry. “See you at church.”

We didn’t go to church until we moved to Morrisville. Mum said it would be an excellent place for Laurence and me to make friends, before the new school year started. Laurence made friends, Mum got snapped up by the Ladies Committee and I became the seventh member of the Youth Group. The other six were okay but they’d known each other for years and years and I was … different. I didn’t know where to find Leviticus in the Bible, or how to sing the hymns. Not that it mattered. We spent most of our time babysitting anyone younger than us (Laurence and his mates, two runny-nosed little girls and a million bawling, smelly babies) while Reverend Thomas droned through his sermon. Then someone suggested running a Pet Sunday, to encourage even more snotty-nosed kids to turn up. (I didn’t think it was a good idea, but we had a vote. I lost: 6 - 1). Maybe they thought pets would be desperate to come to church and their kiddie owners would tag along too.

I found Laurence down by the rabbit hutch. Together we got Snowflake into his carry cage. Snowflake was white and fluffy. Laurence was muddy.

“You should have left Snowflake alone and cleaned yourself up,” I told Laurence as we walked the two blocks to the church. “It’s a church service, not a pet show.”

“What are they going to do to him?” Laurence kept tight hold on Snowflake’s cage.

Reverend Thomas had been pretty vague about the actual service. “Bless him, I suppose.”

Good question. I thought animals already had a pretty special arrangement with God. After all, He got Noah to make sure all their species survived the flood while a lot of human beings went down the tubes. “So they’ll lead good lives and love one another,” I said pompously. Well, I’m sure that was in the Bible somewhere. Leviticus, maybe?

“But Snowflake leads a good life!” Laurence poked a finger through the cage and stroked the rabbit’s fur. “He loves everyone!”

Laurence was a pain, especially when he had all the answers. “You don’t know that,” I pointed out. “Maybe he secretly hates someone. Maybe even you!” 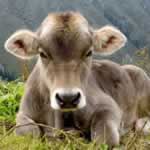 We turned the corner. A small zoo had arrived on the little patch of lawn outside the church - several dogs, three sheep, a calf, a pig, two goats and various things in cages. People milled around getting tangled up in leads and tripping over pets. Reverend Thomas milled too, looking very pleased with himself. He didn’t even notice when a small dog peed in his trouser cuff.

“Hey, Janice!” Martin Davey yelled from the church porch. I blushed, and hated myself for it. I've got to admit that Martin Davey was the main reason I kept going to church. Only trouble was, he barely knew I existed. Martin was our Youth Group leader. He treated me the same polite way he treated everyone, even the bawling, smelly babies. “We need someone for the rodent section,” Martin said as I clambered around animals and made it into the church. “Can you do that?”

“I'll do the farm animals.” I waved at the baaing, mooing bunch outside.

“No,” Martin consulted a list, “Anna and Lindy are doing that, Peter and Philip have offered to organise caged domestic pets - cats and rabbits, mainly, as well as a turtle and some frogs - and Fiona’ll deal with dogs. I thought they should be kept separate so that the cats and rabbits don’t panic.” He looked up from the list and smiled at me. He had warm brown eyes. All of a sudden I had wobbly knees.

There is no justice in the world. I like animals; rabbits, cats, dogs of any shape and size, ants, tadpoles, spiders, even cockroaches. But - rats?

“I once got bitten by a rat,” I said shakily. “In our woodshed, when I was a kid. There was a whole nest of them under a sack and -” I shuddered at the memory.

“These ones are in boxes and stuff,” Martin assured me cheerily. “you’ll be right.”

Music started up (Mrs Thomas on the electronic organ) and people began to troop into the church. I found the rodents and their owners in the choir rooms. Two hamsters, five white mice, a guinea pig, one mean-looking rat and a shortage of boxes. The rat and one of the hamsters were held, lovingly, by their owners.

“Don’t you think they’d be happier in a container?” I looked around the room, hoping for a supply of large rodent-proof biscuit tins.

“No.” The rat-owner stroked his pet. The rat had little red eyes and a twitching nose. It could smell me. It knew. “Elvis likes being close to me. I wanna carry him.”

“Me too,” said the hamster-owner.

“Besides,” the rat-owner looked down his freckled nose at the boxes held by the other kids. “Reverend Thomas can’t bless him properly if he’s in a box. He’ll just end up blessing the box, won’t he?”

“Yeah?” One of the mice kids took his mouse out of the box. “Then I’m carrying mine, too.”

“Me too.” The other kids discarded their boxes and hugged their rodents. The choir room smelled strongly of rat droppings. My mouth felt dry.

“Ready, Janice?” Martin put his head round the door. “Bring yours in at the beginning of the hymn. Front of the church, left-hand side.”

Mrs Thomas hit a couple of loud chords on the electronic organ and the singing began.

I marched down the aisle. The kid with Elvis was right behind me. My skin crawled. I could feel the rat’s eyes, sense his twitching whiskers and sharp teeth. We lined up at the front of the church. Peter and Philip led in the cats and rabbits behind us. Dogs and farm animals lined up on the other side. Reverend Thomas brought up the rear, nervously checking the carpet. Fortunately someone had put newspaper down on the part where we all stood and waited.

The hymn ended and the congregation sat down. Reverend Thomas droned on - fairly quickly, for him, with an eye to the state of the newspapers under the farm animals - and got to the blessing bit. He muttered in a deep sonorous voice, his hand on the head of each animal in turn - calf, sheep, goat, pig, dog, cat, rabbit, turtle, frog, and finally the rodents. Last one: Elvis.

Elvis’s owner smiled happily up at Reverend Thomas as the big man touched the rat’s head with his bony finger. I closed my eyes.

The rats in the woodshed were right there in my memory. Revolting pink hairless babies wriggling like worms. I had a stick in my hand. I'd used it to chase off their mother, before I'd lifted the sack and found the nest. I brought the stick down. Hard. Again. And again. And again on the horrible squirming mess, then I threw the sack back over them. That was when she bit me.

Something pressed against my shoulder. I opened my eyes. Elvis clung to my shirt. His red eyes stared at the lobes of my ears. His whiskers touched my neck.

“…living together in harmony…” Reverend Thomas droned from the pulpit.

“You can lead your group out now,” urged Martin Davey from somewhere behind me.

The rest of my group straggled up the aisle towards the exit. I couldn’t move.

“Get him off!” I hissed at Elvis’s owner.

The kid reached up and lifted the rat away from my face. “I reckon he likes you.”

Mrs Thomas attacked the organ again. The congregation sang something about the lion and the lamb lying down together, and I stumbled out to where Laurence and Snowflake were waiting for me in the porch.

“Is that it?” asked Laurence. “Snowflake’s okay now, isn’t he?” He lifted the rabbit’s cage to eye level and peered anxiously at the cloud of white fur.

“I think that went pretty well.” Martin Davey came up behind me, his face sunny with smiles. “The Youth Group are meeting for Coke and chips down at the hall.” He held out his hand. “You coming?”

I stared down at his hand. His palm was pale pink and soft. He beckoned with his fingers. They wiggled. Pink, soft, wriggling…

But Laurence didn’t move. “Living together in harmony,” he crooned. I opened my eyes. He was smiling up at Martin Davey and bumping Snowflake’s cage gently against Martin’s legs. “Me and all the animals!”

Martin smiled. “That’s right,” he said, “but it’s not always easy.” He leaned towards me and whispered, “The tricky part is explaining why we kill and eat ’em.” Then he added, in his ordinary voice, “Sure you won’t change your mind? Your little brother can come too, if you like.”

Read our interview with Pat Quinn, opens a new window.