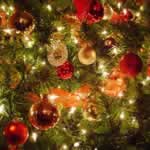 The trolley was first published by Penguin Books (NZ) Ltd in 1993, with illustrations by Kerry Gemmill. The story is reproduced here with permission of the copyright holder.

A week before Christmas, Tania looked in her bankbook and said to herself, 'I won't be able to buy my kids any Christmas presents this year because I can't afford it.'

She put her bankbook away, took her washing to the line and began hanging it out.

She was thinking about Christmas.

As she was returning to the house, she noticed the old pram that they used for collecting firewood, and she had an idea.

'I could take the wheels off the pram and make Miria and Hoani a trolley for Christmas,' she thought, 'just like the one I had when I was a kid.'

The idea pleased her.

She looked in the woodstack and found a board and some short pieces of wood suitable for a trolley.

She went to the toybox and found an old skipping rope that could be used to steer the trolley with, and out by the back steps there was a wooden box that could be made into a seat.

She spent the rest of the day taking the wheels off the pram.

Before it was time for Miria and Hoani to come home from school, Tania hid all the things she'd collected under the house where the kids wouldn't see them.

'Tomorrow I'll go and buy a bolt and a few staples and nails,' she thought. 'I'm sure I'll be able to afford that.'

So the next day she went to the shop and bought the things she needed, and put them away.

On Christmas Eve, Tania went to the neighbours and asked if she could borrow a drill and a saw.

The neighbours gave her the tools, then they said, 'Tonight we're having a few friends coming for a Christmas celebration. Why don't you come over later?'

'I'd like to,' Tania said, 'but I'm making a Christmas present for my kids. I'm going to do it while they're asleep.'

'Good luck with it, then,' the neighbours said.

That night Tania had trouble getting Miria and Hoani to bed. They wanted to stay up late and watch television.

'Everyone else stays up late,' Miria said. 'Especially when it's holiday time.'

'How come we never get to stay up?' Hoani asked.

Tania had to switch television off before they would go. They went off to bed mumbling and dissatisfied, and it was a long time before they went to sleep.

Once they were asleep, Tania took all the things she'd saved out to the washhouse and began to make the trolley.

It took longer than she thought to put all the pieces together, and by the time she'd finished it was nearly morning.

'Other kids will get new bikes and skateboards for Christmas,' she thought. 'Miria and Hoani might not like having a trolley for a Christmas present. They mightn't like having a mother who makes them a trolley. They might be embarrassed. Perhaps I've wasted my time. Perhaps I should've gone and celebrated at the neighbours' instead of doing this.'

But she painted NGA MIHI NUI O TE WA and MERRY CHRISTMAS on the trolley and put it out by the back steps.

She went to bed, but she didn't feel happy.

In the morning she told Miria and Hoani that there was a present for them out by the steps, and they went out to see what it was.

When they saw the trolley they didn't say anything. They just got on it and went riding down the path and out the gate.

'Come back here!' Tania called. 'You can't go out there in your pyjamas.'

They took no notice.

Miria and Hoani took the trolley to the top of the street and began riding down the steep footpath, laughing and shouting.

Other kids were there with bikes and skateboards, and they had to get out of the way as the trolley went whizzing past.

Soon all the kids were having turns on the trolley.

Tania watched them from the top of the footpath.

'It looks a bit dangerous,' she thought, 'but at least they're having fun.'

Just then, Miria and Hoani came up the footpath pulling the trolley.

So Tania got on the trolley and off she went, speeding down the footpath with all the kids watching her.

'Neat trolley you've got,' the kids called to Miria and Hoani. 'Neat mother you've got, too.'

Read our interview with Patricia Grace.