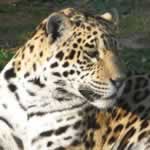 A troublesome child called Susan McGoo
went off, by herself, to visit the zoo.
She cared not one bit that her mother would mind
her leaving her brothers and sisters behind;
that she'd left all her chores and her homework from school
and, most importantly, rubbished the rule
that said NEVER GO WANDERING OFF ON YOUR OWN.
"Huh," Susan said sniffing. "I’m all right alone."
She frequently sniffed, in a rude sort of way.
She often made faces, and sometimes at play
she pinched and she poked til her playmates all fled.
Did Susan care? No, she just tossed her head
and wandered away to play tricks for a while
on her grandma (who thought that Susan was vile).
So it has to be said that Susan McGoo
was not sadly missed when she went to the zoo.
She slipped through the gates without paying a cent.
Then straight to the cage of the lions she went.
And although they were dozing, relaxed in the sun,
she woke them all up by poking each one
with a sharp pointed stick not unlike a spear.
When she'd set them all roaring she ran off from there
to tease a large gibbon by offering a snack.
When he reached out to take it, she snatched it right back.
She chased after emus with wild eerie shrieks --
so alarmed were the birds they were nervous for weeks.
She pulled tails on zebras and then ran away.
She put prickly twigs in the elephants' hay.
She could just reach inside a cage full of birds
and she rattled their perch and said awful words.
She lassoed a camel, threw stones at the bears.
She shouted insults in the chimpanzees' ears.
A peacock passed by with his tail outspread.
Susan McGoo shied a rock at its head.
Oh, Susan McGoo caused quite a to-do
as she went on her wild wicked way through the zoo.
She cared not a jot that those watching got mad
and she laughed when they called her shocking or bad.

But she didn't know that a keeper had seen
the chaos and mayhem wherever she'd been.
Bert was his name and the zoo was his passion.
Susan McGoo couldn’t act in such fashion
without Keeper Bert, who was cunning and tough,
deciding that really, enough was enough.
To the chimpanzee cage he crept on tip-toe.
He opened the door -- just a little bit so
it wouldn’t be seen by the creatures inside.
But Susan’s sharp eyes saw the gap and she cried,
"I'll let the beasts go! How the keepers will shout!"
And straight in she went to chase the chimps out.
She'd gone just two steps inside the chimp’s cage
when crash! The door slammed! Susan whirled in a rage.
Bert smiled at the girl and lifted his hat.
He locked the cage firmly and said "That is that."
And happily singing, "Hi di diddly day,"
The zoo-keeper went on his nonchalant way.

Well, Susan was mad! She was mad as could be!
She howled and she raged. It was fearsome to see.
She rattled the cage and kicked at the door.
She stamped on the ground - til her feet were quite sore.
She lay down and kicked (as though she was 2).
She even stopped breathing until she turned blue.
In the end a big chimp couldn’t stand any more.
He grabbed her and put her inside the door
of the shed where they slept, and each time she tried
to come out in the cage, he pushed her inside.
That’s where she stayed for nearly a week
by which time her voice was no more than a squeak.
Then the chimps, knowing all could be peaceful again,
let her wander about with them all in their pen.
So that troublesome child named Susan McGoo
stayed ever more as a guest of the zoo.
"What’s that small sort of beast?" the people would query.
"A monkey of sorts. The species all vary,"
Bert would nod, sort of knowing. The folk would nod, too.
They enjoyed hearing experts explaining the zoo.

The McGoos made a small sort of search for their child.
"But you know," said her mother, in tones now grown mild,
"It’s so much more peaceful without Susan here.
We won’t look too hard. She'll prob'ly appear."
Then she gathered the rest of her children together
and because it was sunny, not inclement weather,
they went on a trip to visit the zoo.
"There’s a new sort of monkey," said Mr McGoo.
"It’s wild and sometimes stamps round in a rage,
but if you’re all good and stay back from the cage
you can throw it some food - peanuts will do.
Even wild things need feeding," said Mr McGoo.

Read our interview with Pauline Cartwright, opens a new window.