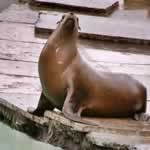 In the school holidays Garth went to stay with his great-grandmother who lived by the sea. The path to her house was made of white shells and the doorstep was a large flat stone.

'Your great-grandfather brought this stone from the rocks at the bottom of the cliffs,' she told Garth. 'He died before you were born but the stone will remain here for ever.'

Garth liked his old-fashioned bedroom, with its white bed-cover and a round mirror. He could hear the sea through the open window. In the night he heard a strange barking sound and next morning asked Grandma what it was.

'Seals at the foot of the cliffs,' she said. 'This is a wild part of the coast. You won’t be able to swim here. The seals come to sleep on the rocks.'

'Can I go down the cliffs?' Garth asked.

'Yes. There’s a path. But don’t disturb the seals. They are protected by law. And never get between a seal and the sea.'

'It’s dangerous. The sea is their home. They like to keep their path clear.'

Garth went down the cliffs and saw five seals asleep on the rocks. They looked like big dogs and he was too scared to go near. He threw a stone at one of them and it woke up and hurried into the sea. He threw more stones and chased another into the sea. This made him feel very pleased with himself. He kept throwing stones till he had chased all the seals into the sea. Their heads bobbed about as they swam through the seaweed and rose to look at him.

He climbed on the highest part of the rocks where they had been sleeping and called out, 'I’m the king of the castle!'

The seals swam away to rest on a little island where he could see them but could not reach them.

After that it was lonely on the rocks so he went back to Grandma's.

'What’s the name of that island out in the sea?' he asked her.

'The Island of Seals,' Grandma said.

After a few days Garth felt bored at Grandma's. There were no other children to play with, and Grandma spent a lot of time working in her garden. Sometimes she played a game of draughts with him or sent him to the store to buy groceries and ice cream. But there was nothing to see except sheep in the fields and clouds in the sky.

At first he went down the cliffs every day and threw stones at the seals and chased them away, but then they stopped coming to the rocks.

The last night of his holiday he lay awake for a long time. A full moon rose in the clear sky and lit up the round mirror in his room. He could hear the waves roaring on the rocks below the cliffs then a voice calling his name, 'Garth!'

He got up and leaned out of the window. The moon shone on Grandma’s flower garden and made a bright path on the sea. A seal was lying on the flat stone that Grandpa had brought up from the sea long ago to make a doorstep.

The seal moved its head and looked towards the sea as though to say, 'Come!' and it began to swim away through the moonlight.

Garth thought, 'I could do that, too!', and floated out through the window and swam through the air.

The seal passed over the cliff-top and down to the rocks with Garth following.

'He will dive into the sea and I shall be drowned,' Garth thought. 'Why can’t I stop?' But the seal swam out towards the Island of Seals without entering the water and Garth followed unharmed.

Many seals had gathered at the island and were grouped around a platform that was shining like a mirror. In the centre sat a seal who was much bigger than the others. His head was held high and he looked very proud.

On either side of him sat five young seals with their heads up, looking this way and that, as though expecting someone. Garth wondered if they were expecting him?

Soon he had reached the platform and stood in front of the biggest seal, who wore a necklace of pearls.

'Is this the boy?' asked the big seal.

'This is the boy, O King,' answered the seal who had led him to the island.

The seal king, without moving from his place, drew himself up to his full height. He looked very tall and grand and Garth felt afraid.

'Tell me,' the king said, 'why do you chase the seals from their ancient resting places?' When Garth did not answer, he continued. 'We know you throw stones. We have proof. We have victims. We have witnesses. We have the stones.'

'So do we!' said the king. 'Here are the stones you have thrown at my people. Now you may have them back!'

At that moment a shower of stones began to tumble down on Garth like a hailstorm. The seals began to laugh, and call out, 'I’m the king of the castle!' Garth heard a roar of laugher around him like the roar of the sea.

'Stop!' he cried, hopping from one foot to the other.

The shower of stones ceased.

'Are there no more?' asked the king.

'That is every stone he has thrown,' answered the seals.

'And more than enough, too,' thought Garth, rubbing his shins and elbows.

The king turned to the ten young seals who sat beside him. 'Shall we let him wait for the rest of the concert?'

'The concert has begun,' the king said to Garth. 'Returning the stones was the first item. As you are a visitor you may sit in the front row with me.'

At once Garth found himself sitting in the front row of the audience, watching the seals' concert. All the items were given by the seals. He watched slow graceful dances, heard strange choruses and the blowing of trumpets, and he even saw a play.

The play was about a comb made from a shell, the kind of comb that is worn as an ornament in the hair. A seal found it and showed it to another seal and hid it under a stone because he wanted to give it to a mermaid that he knew. The second seal stole it and tried to give it to the mermaid himself, but she had seen him steal it. She gave it back to the first seal, who asked her to marry him, and she said she would. The last scene showed the mermaid fixing the comb in her hair.

All the time that Garth was watching the play he felt cold and could not have felt colder if he had kicked all the blankets off his bed. And that was exactly what had happened. He was still in bed at Grandma’s and his blankets were on the floor.

'Have you had a good holiday?' Grandma asked him, as she saw him off on the bus.

'Oh, you’ve been out to the Island of Seals, have you?' Grandma said, laughing. 'Come again next year.'

Read our interview with Ruth Dallas, opens a new window.