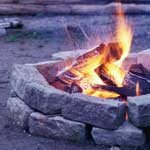 "Don’t fuss, Dad. I'll be okay." Kelly pushed an extra tin of baked beans down the side of her backpack and tightened the straps.

Dad picked up a floppy sunhat. "Here, you’ve forgotten this. It might be a good idea if I swap shifts so I can come along and help. I've never missed a school camp."

"But they need you at the station while the fire chief’s at the conference." Kelly grinned at her dad. "I'll be cool as. Really."

"Be sure you’re careful with your campfire."

Kelly hoisted her pack on to her shoulder. "No need to worry. Look what a good teacher I've had." She pulled her floppy hat down around her ears. "If you don’t stop fussing I'll miss the bus and you’ll be late for work."

When they arrived at the school gates the children had started boarding the bus. Kelly hurried over to join her new friend, Emma, who had never been on a class camp. The girls sat together on the bus and Kelly explained how they worked in pairs to put up their tents, cook their meals and paddle their kayaks.

"I like cooking. I’m a whiz with the microwave but I wouldn’t have a clue how to light a fire," said Emma. "I hope this campfire stuff isn’t too hard. We don’t have to rub two sticks together, do we?"
Kelly laughed. "We're not that primitive," she said, "but we do have strict rules and Mrs Nelson and the parent helpers keep a careful watch on everyone."

"Is it dangerous?" asked Emma.

"Not as long as we follow the safety rules," replied Kelly. "I'll show you how we do it after we've put up our tent."

"After we've cleared a space for our campfire we gather some sticks and stones," explained Kelly. "Then we make a small ring with the stones and scoop out the inside a bit to make a hollow." She loved making fires. She stacked the sticks around some paper till it looked like a wigwam. "Pass us the matches, please Emma," said Kelly. She lit the fire and snapped the match in half. "I bet our baked beans'll be cooked first," she said.

The flames flickered through the sticks as the girls opened the tins and scooped the beans and sausages into their saucepan. Emma nudged Kelly and she looked up to see their class teacher approaching.

"Everything okay? Good to see you remembered your tin openers. Half the class can’t find theirs," said Mrs Nelson.

Kelly watched her teacher and the parent helpers walk around the campsite checking the fires. It was really cool to be in charge without Dad telling her what to do all the time. She loved him, but fuss, fuss, fuss …

Kelly and Emma were the first to finish their food. They were very careful to put their fire out properly before collecting the paddles for the afternoon kayak adventure.

"Do you know what to do?" asked Emma. "I've never been in a kayak before."

"No sweat," said Kelly as they buckled on their life jackets. Dad had always taken the front seat and set the pace but now, at last, it was her turn to be the leader. She showed Emma how to swing the paddle and then she set a steady stroke as the kayaks moved out into the bay. The sea was mirror calm and the bright reflections of the kayaks appeared and disappeared between the glide and dip of the paddles. Mr Armstrong’s kayak led the way to the point. He had on a brown and green life jacket. All the rest of the paddlers wore yellow jackets.

"It’s okay. He forgets he’s not racing in one of his competitions. He'll check before he turns the point and slow down and wait for us. Just keep in time with me. you’re doing fine, we've got a nice rhythm going." Kelly had set a slower pace than usual to let Emma get the feel of the swing and dip of the paddle so they were trailing the other kayaks.

As they neared the arm of the bay Kelly looked over her shoulder for a last glance at the camp and was horrified to see smoke drifting in front of the tents. "Fire!" she shouted and held her paddle in the water to turn the kayak to face the shore. "Keep pace with me, I'll call the stroke," she called to Emma. "Right swing, left swing, right swing …" The kayak picked up speed and sliced through the sea as they raced towards the shore. They were halfway across the bay when Mr Armstrong’s kayak caught up with them.

"Looks like a grass fire," he called and shot ahead into the lead.

As they drew closer to the beach Kelly could see yellow flickers racing towards the low shrubs that grew around the campsite. Mr Armstrong climbed out of his kayak and started to run towards the camp but the fire reached out to a dead manuka and a gust of wind sent a black cloud of smoke billowing towards him. He paused for a second and then ran back to the water’s edge.

"No one’s to go ashore," called Mrs Nelson. She rested the paddle across her knees, pulled out her mobile phone and punched in 111.

"Where are you, Dad?" thought Kelly as she watched the manuka blossom into a red flame tree. "We need someone to fuss, fuss, fuss …"

From far away she could hear the fire siren at the station winding up into its shrieking response to the emergency call.

Mrs Nelson, Mr Armstrong and the other parent helpers stood in a group on the beach. "Why don’t they do something?" wondered Kelly as she watched the grass fire get closer to the tents. She knew it would take a while for the fire engine to get to the site and for the firemen to set up the pump to get the fire under control. "We've got buckets to put out our campfires," she said to Emma. "Buckets!" she called out to the group of adults.

Mr Armstrong and another father took off at a run towards the teacher’s tent and Mrs Nelson came down the beach. "Pull your kayaks above the high tide mark and form a line from the sea up towards the camp but don’t go too close to the grass," she said.

The children were ready and waiting when the men hurried back, each carrying a red, yellow and blue bucket. They passed them out to the group standing closest to the sea and hurried back to the head of the line where Kelly stood behind Mrs Nelson and the other parents.

They passed the buckets along the line and the water sizzled as it hit the hot grass and the rise and fall of the wailing siren came closer and closer. Some more bushes had caught fire and they crackled and spat sparks and sent plumes like black feathery clouds spiralling into the air. Sometimes a gust of wind sent the smoke billowing back towards the fire fighters and made them cover their noses and wipe their stinging eyes. But the damping down of the grass was working. The men at the head of the bucket brigade had reached the space that had been cleared in front of the tents and it seemed that they would be safe as long as no sparks from the bushes were blown back towards them.

A loud cheer went up from the group as the sound of the wailing siren sang in their ears and the fire engine pulled up beside the campsite. Kelly was relieved to see her dad jump down from the cab and run to set up the gear. She continued to pass buckets along the line as the hoses were laid out towards the burning bushes. By the time they were in place the tanker had arrived. The bucket brigade paused to watch the firemen connect the couplings and turn on the cocks. There was another cheer as the flat hose came alive like a snake racing towards the flames to devour the fire.

Everyone watched the powerful wall of water advance across the burning bushes, drenching and quenching the thirsty flames. Great clouds of smoke formed above the dying fire and hovered over the campsite like a thick smog.

Kelly emptied the last bucket of sea water and went over to stand by her father who was damping down hot spots. He put a hand on her shoulder. "You okay?"

"Fine," she said. "I’m fine." She swung the bucket back and forth. "Dad, it wasn’t us. We didn’t start the fire. We put ours out properly." She held the bucket up. "I put two buckets of water over the coals, then I dug the ashes and stuff into the soil."

Kelly tugged at his sleeve. "Then Emma poured another one over just to make sure."

"Where is she, your new friend?" asked her father.

"There she is, standing outside our tent." Kelly beckoned Emma to come and join them. "She’s a very careful person, Dad."

"I’m sure she is, and I know you are," he said as he patted her shoulder. "I presume your fire place was more or less in front of your tent."

Kelly tugged at his sleeve again. "Dad, we put …"

Dad gave an exasperated sigh. "Stop fussing and introduce me to Emma. I can tell you both that the trouble started from that fireplace a couple of sites along from the big tent."

"Dad, will we have to break camp and go home?" asked Kelly.

"I'll phone the fire chief and talk it over with Mrs Nelson. We'll only let it go ahead if we're quite sure everything’s okay. A couple of the men from the brigade will stay and keep an eye on things."

Kelly scuffed her feet. "If they let the camp go ahead, can you stay?"

Dad grinned. "I was just thinking how well you were getting along on your own."

"But you wanted to come," said Kelly.

"Maybe it’s good for you not to have your old dad hanging around all the time. You were doing fine before the fire, weren’t you?"

"She showed me what to do," said Emma.

Kelly started to laugh. "You, Dad," she said.

Read our interview with Wanda Cowley, opens a new window.