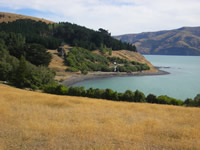 Takapūneke (Red House Bay) sits between the present day Akaroa township and the Ōnuku settlement further along the harbour. Close by is the Greens Point Reserve, the site of the Britomart monument. Takapūneke’s story covers events important in both Māori and Pākehā history.

Takapūneke is closely linked with the story of Ngāi Tahu upoko ariki (paramount chief) Te Maiharanui (also known as Tamaiharanui or Tama-i-hara-nui). Te Maiharanui was a strong and ruthless chief at the centre of the Kai Huanga feud which had devastated the Ngāi Tahu communities of Waihora, Wairewa and Banks Peninsula in the 1820s. The dispute petered out when the threat of Te Rauparaha forced the Banks Peninsula peoples to regroup to face this Ngāti Toa adversary.

Takapūneke was the site of the kainga used by Te Maiharanui during this time and was a convenient base for trading with Europeans eager for flax fibre. Flax was gathered around the harbour and nearby lakes, and then shipped to Sydney and further abroad.

At Kaiapoi Pā in 1829 several leading Ngāti Toa chiefs (including Te Pēhi) were killed. This had grave consequences for Te Maiharanui and his whānau living at Takapūneke, as Te Rauparaha sought revenge for the slaying of his kinsmen.

On 6 November 1830, aided by Captain Stewart of the brig Elizabeth, Te Rauparaha captured Te Maiharanui. Stewart had agreed to transport Te Rauparaha secretly to Takapūneke in exchange for a cargo of flax, so that he could seize Te Maiharanui. Under the pretext of flax trading, the Elizabeth anchored off Takapūneke awaiting the return of Te Maiharanui from Wairewa where he had gone to prepare a shipment of flax for one of his traders.

When Te Maiharanui, his wife and daughter and other Ngāi Tahu came on board, they were seized by Te Rauparaha and his war party (taua) who had been hidden below decks. The kāinga at Takapūneke was raided and many slaughtered or enslaved by the Ngāti Toa war party.

Te Rauparaha then returned to his Kapiti Island stronghold with his prisoners. On the journey, in order to prevent his daughter Ngā Roimata being subject to torture and enslavement on their arrival, Te Maiharanui took her life and threw her overboard. He was himself later killed by his captors, who included relatives of the chiefs who had died at Kaiapoi in 1829.

The capture of their paramount chief at Takapūneke and the sacking of the settlement brought to an end Takapūneke’s function as a centre for trade between Māori and visiting Europeans. From the earliest days of European contact, whalers and other traders had visited to replenish necessary supplies, especially food. Much of the land had been cultivated and there was trade in timber, food and flax. Following Te Rauparaha’s attacks on Takapūneke and later Ōnawe, survivors sought refuge at Ōnuku and cultivated the land there.

Takapūneke and the Treaty of Waitangi

The British government were horrified when they discovered the complicity of Captain Stewart. He had departed for places unknown without the promised flax after he had unloaded his ‘cargo’ at Kapiti.

Concern had already been building about the lawlessness in New Zealand. As a direct consequence of the involvement of Stewart and the Elizabeth in this incident, James Busby was despatched to be British resident in 1833, beginning British involvement in the affairs of New Zealand.

The events that took place at Takapūneke in 1830 contributed to the momentous event that occurred ten years later — the signing of the Treaty of Waitangi on 6 February 1840. The people of Banks Peninsula had their chance to sign the treaty in May 1840 when Captain Bunbury visited at Ōnuku, one of three sites where Ngāi Tahu signed the treaty.

Greens Point and the Britomart monument

Imperial rivalries were at play during this period. In August 1840, Captain Stanley of the Britomart raised the British flag at Greens Point demonstrating Britain’s sovereignty over New Zealand — well before the arrival of French settlers on L’Aube.

In 1898 the monument that stands at Greens Point was erected to commemorate Queen Victoria’s 60th jubilee and in recognition of the importance of the site. In 1928 the land around the monument was purchased and designated as ‘land of historic interest’. 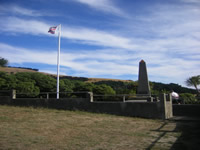 The status of Takapūneke and Greens Point today

Despite the historic, cultural and spiritual significance of this important site, Takapūneke ended up being used as a rubbish dump and a sewage treatment plant. By 1992 plans for a residential development were being considered. However, concern was raised in 1995 that the current and proposed uses were not appropriate for such a significant cultural and archaeological site. In 1998 a “Heads of Agreement” between the local council and Ōnuku Runanga was signed, but without resolution of the future of the site.

The Takapūneke Historic Reserve finally achieved recognition of its significance in the history of the nation as a whole in 2002, when the Historic Places Trust registered the entire area as wāhi tapu (covering the Takapūneke reserve, Greens Point land and Britomart monument).

The amalgamation of the Banks Peninsula District Council with Christchurch City Council has passed resolution of the long-term future of this site to a new council. A decision has been reached between Ōnuku Rūnanga, Christchurch City Council and the government about the future of Takapūneke Historic Reserve. The site was handed back to Ōnuku Rūnanga from 5 February 2010, an important step in recognising the role that this area played in the establishment of New Zealand many years ago. 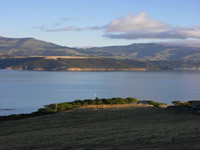 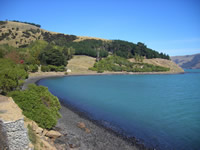