Every two years, Te Matatini organises the Te Matatini National Kapa Haka Festival, where top kapa haka teams from New Zealand and Australia compete for the honour of being crowned the best of the best. From 4 to 8 March 2015, Te Matatini was hosted by the Waitaha rohe at Hagley Park (North), Christchurch. 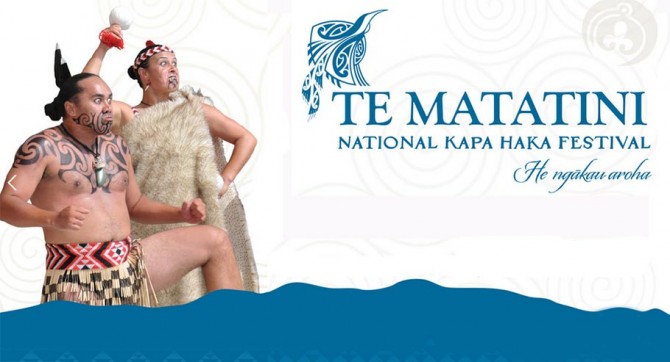 Māori Television has videos of the haka groups that performed at Te Matatini National Kapa Haka Festival at Pūtaringamotu, Christchurch.

Te Matatini started in 1972 and is now the world’s largest celebration of Māori traditional performing arts, attracting over 30,000 performers, supporters and visitors.

Over four days, audiences experience the best Māori performing arts in the world - from the harmonies of dynamic group singing to the graceful movements of women performing the poi and the ferocity of the male haka.

Te Matatini is a whānau friendly, smoke, alcohol and drug free event. It is an opportunity for all people, regardless of culture, background or age to come together, to share and celebrate.

While the main focus is kapa haka, Te Matatini also celebrates Māori culture and cuisine. Visitors can enjoy a range of retail and food stalls, art and craft exhibitions and other entertainment activities.

All kapa haka performers, supporters, dignitaries and visitors are welcomed by the local hosts.

Kapa Haka teams are required to perform six disciplines within their performance piece - whakaeke (a choreographed entry), mōteatea (traditional chant), poi (light ball swung on the end of a rope), waiata-ā-ringa (action song), haka and whakawātea (exit). They must perfect every discipline in a polished 25 minute performance.

Each performance is judged against set criteria, by expert judges, appointed from around New Zealand.

Taonga (trophies) are awarded to the team with the highest score in the seven compulsory (aggregate) categories (the six disciplines mentioned and the seventh category, Te Reo Māori - the use and clarity of the Maori language). Further taonga are awarded across non compulsory (non-aggregate) categories such as Kaitātaki Wahine (Best Female Leader), Kaitātaki Tāne (Best Male Leader) and Kākahu (Costume).

The top three teams with the highest combined marks in their competition pool will compete in the Competition Finals.

The finalists are judged anew to determine third, second and the new Toa Whakaihuwaka - overall winner of the competition.

Te Matatini takes place in Hagley Park. It lies within the wakawaka of Pūtaraingamotu, the site of one of the many kāika (settlements) established in the maze of swamps, waterways and lagoons lying between Waihora (Lake Ellesmere) and the Waimakariri River.

Pūtaringamotu means either the place of an echo or the severed ear. The latter is a metaphoric expression referring to ‘bush isolated from the rest’. This is in reference to the great fire that swept across Ngā Pākihi Whakatekateka o Waitaha (the Canterbury Plains) during the moa hunter period, leaving behind this bush remnant.

Local Māori also believed that at a certain place in the forest, those trained and skilled in the practice could hear the sound of people approaching on the trails through the surrounding swamp by putting an ear to the ground, hence the name ‘place of an echo.’