Paula Rigby is a weaver and fibre artist. In this brief piece she describes three of the garments on display at libraries during Matariki 2011.

The text below is a transcript of Paula's description of the cloaks.

Cloaks a commentary on the role of women

2:18min, 3.1MB
The cloaks are a discussion on the role of women. Traditionally women were the weavers. The ideas came into my head about looking at the introduction of the blanket and how that affected women’s roles within the hapu and the iwi.

As a weaver you could expect to be reasonably well off — if you were a good weaver your work was traded and you brought economic value to your people.

Once the blanket came in it became a bit of a status symbol and was passed down from whanau to whanau — weaving became secondary to the cloak. So that had an impact on women and their roles and their status. Then there were all the detrimental things with the cloak — we lost land, we lost people; it helped spread disease; and we lost weaving skills, because why bother weaving when you could just get a blanket?

So it’s a commentary about all those sorts of things.

Second in a series of works

This is the second series that I’ve done. The first series looked at what’s known as ahi kā — which is keeping the home fires burning. There’s a whole lot of deep meanings associated with ahi kā, but they are pretty much the people who stay on the homelands, keep the marae going, always have it ready for any function that’s going to happen; so it was looking at those roles and discussing those and bringing back memories of conversations with my uncles about their roles in that on our North Island marae.

This new set of works … the underlying commentary is about environmental issues. So if you look at the patchwork blocks that are on there they have flora and fauna contained in them and the blankets have that green colour way.
So it’s talking about land, about how we’re polluting what we have. As a weaver harakeke is really special to me, so one set of blocks does have harakeke in it. 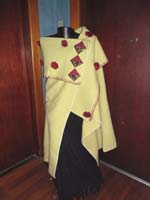 I think the most playful garment that’s there is my take on the ngori — a ngori is a garment that has pom poms on it. If you listen to the old English descriptions of it they call it a garment with pom poms on it. I had a conversation with my kuia weaver and said I really wanted to make a ngori, and she was like why? and I said Because I love pom poms.

She laughed at me and said You know they’re not real pom poms Paula. I said like, no. So this is my version and it’s got real pom poms on it, and I just like it ’cause its kind of playful. 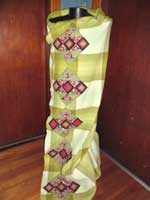 The next blanket has a tartan thing going on it and I like kind of that because I have Irish and Welsh ancestry … These aren’t just Māori they are also a whole melding of cultures because I do have a European history as well.

I learnt craftwork from both of my grandmothers … My Māori grandmother taught me the weaving and that stuff and my European grandmother taught me any kind of craft that I wanted to learn as a young child — patchworking, crocheting and all that sort of stuff. So this kind of combines those legacies from those two women, which again, I guess, reflects on that whole role of women. 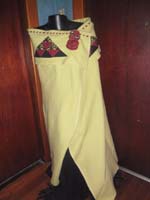 On the third garment — it’s got this really funky felt tiki on it. The tiki is predominantly a women’s symbol, it’s about fertility. Some poeple say it’s the embryo of the unborn child — it was worn by people who wanted to increase their fertility and that sort of thing. Again, great taonga that are handed down from one generation to another, and it’s just my little play on them and adding to the story about women and their roles.